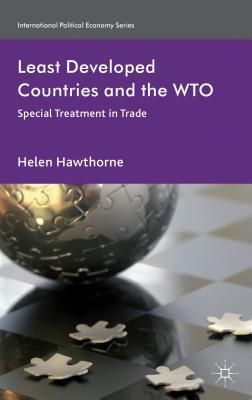 
Not On Our Shelves—Ships in 1-5 Days
A norm of special treatment for LDCs, created by the UN, has spread to various international organisations including the WTO. Within the WTO evidence of the institutionalization of the norm can be found both in the agreements and legal documents and the way in which the LDCs have been treated by other states. Helen Hawthorne investigates how norms impact on negotiations in international organisations. She shows that few studies of international organisations focus on the role of the weaker states in the organization, the majority focus either on the major states or the emerging economies. By ignoring the role of the poorer, weaker states in the GATT/WTO we are ignoring the history of these states in the organisation and do not get a true picture of the organization, how it operates in relation to them and their impact on the organisation.
Helen Hawthorne is Visiting Lecturer at City University London, UK, where she completed her PhD in 2011. She has an MA in International Relations from the University of Kent and a degree in Business Studies from Robert Gordon's Institute of Technology (now the Robert Gordon University), both in the UK.