American Writers in Europe: 1850 to the Present (Hardcover) 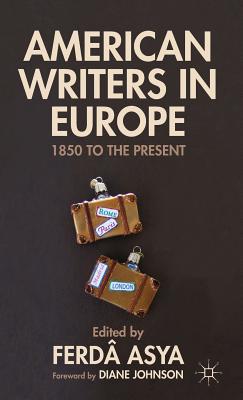 American Writers in Europe: 1850 to the Present (Hardcover)


Not On Our Shelves—Ships in 1-5 Days
These essays explore the impartial critical outlook American writers acquired through their experiences in Europe since 1850. Collectively, contributors reveal how the American writer's intuitive sense of freedom, coupled with their feeling of liberation from European influences, led to intellectual independence in the literary works they produced.

"Professor Asya's interesting essay collection begins with American writers abroad in 1850 and comes close to the present time. A wide group of essay writers comments on not only the texts of works by E.D.E.N. Southworth, Gertrude Atherton, John Cournos, and Edith Wharton as well as poems by Ginsberg, Rich, Rukeyser, Rolfe, Ashbery and others; they also discuss the impetus for travel, the comfort levels of expatriates, and the quality of writing produced. This book provides a useful starting point for further discussions." - Linda Wagner-Martin, Frank Borden Hanes Professor of English, The University of North Carolina-Chapel Hill, USA, and author of Sylvia Plath: A Biography (1987), 'Favored Strangers': Gertrude Stein and Her Family (1995), and Zelda Sayre Fitzgerald: An American Woman's Life (2004)

"An exciting volume of essays, with transnational perspectives that add to the fields of global studies and American studies. Contributors stress the significance of the expatriate experience in the evolution of American and European cultures as well as in the careers of writers from 1850 to the present. Edith Wharton emerges as a major force in transatlantic literature, helping to define through her expatriate vision a critical independence shared by diverse Americans writing from abroad." - Carol J. Singley, Professor of English, Rutgers University-Camden, USA, and author of Edith Wharton: Matters of Mind and Spirit and Adopting America: Childhood, Kinship, and National Identity in Literature

"This fascinating collection of essays on American writers in Europe makes a significant contribution to our understanding of what drew writers as diverse as Langston Hughes, John Cournos, Gertrude Atherton, John Ashbery, Adrienne Rich, Diane Johnson and countless others to 'the old world.' The editor, Ferdâ Asya, and the international group of scholars who contributed to the volume are to be commended for their freshness of approach, and for their selection of writers who, in the main, have not received much notice as European sojourners. Each chapter illuminates what Europe meant for the American writers in residence there, and how they translated their experiences abroad into their creative work. This is a 'must read' for anyone interested in American expatriates or in how American Literature was shaped by European travels." - Christopher Sawyer-Lauçanno, author of The Continual Pilgrimage: American Writers in Paris, 1944-1960 and An Invisible Spectator: A Biography of Paul Bowles

"From the time of Irving and Cooper, travels abroad have provoked important reflections on nation, race, and culture in American writing. Past studies have understandably privileged the expatriates of the twenties, but with the exception of two chapters on Wharton, this eclectic volume mostly explores earlier or later instances of the transformative effect of dépaysement on literary consciousness. It ranges from mid-nineteenth century American novelists (Willis and Southworth) to the post-World War II 'Fulbright poets' and the Beats, with a discussion of recent food memoirs added for good measure. What connects these diverse essays is the paradoxical need to escape the United States to understand the complications and contradictions of American identity." - J. Gerald Kennedy, Boyd Professor of English, Louisiana State University, USA, and author of Imagining Paris; Exile, Writing, and American Identity