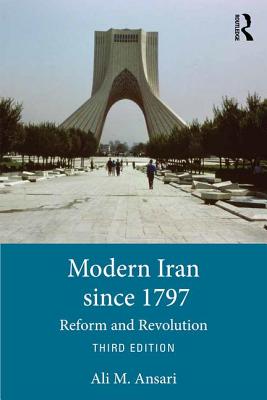 Modern Iran since 1797 offers a comprehensive analysis of political, social and economic developments in Iran since the end of the eighteenth century. Spanning two centuries, the book provides historical context for Iran's international relationships and its internal struggle to reconcile itself and its traditions with the modern world.

The book presents an overview of this crucial period in Iran's history, its emergence from the political turmoil of the eighteenth century through to its initial encounter with the industrial powers of Europe and its attempts to navigate the turbulent waters of European imperialism. It assesses the impact of European ideas on the triumph and tragedy of the Constitutional Revolution, which established the political template for the country going forward and against which all other political developments have been measured. This new edition has been updated to incorporate new scholarship and research to make a rounded assessment of recent developments and bring the text fully up to date. A substantive new prequel has also been added, covering the long nineteenth century from 1797 through to 1921, including a fuller and more detailed treatment both of the Constitutional Revolution and the events and ideology that underpinned it.

Written in a clear, engaging style and highlighting Iran as a state and society grappling with the realities of the modern age, Modern Iran since 1797 remains the perfect guide for all those studying the history of modern Iran.

Ali M Ansari is Professor of Iranian History at the University of St Andrews. His most recent publications include The Politics of Nationalism in Modern Iran (2012) and Iran: A Very Short Introduction (2014).