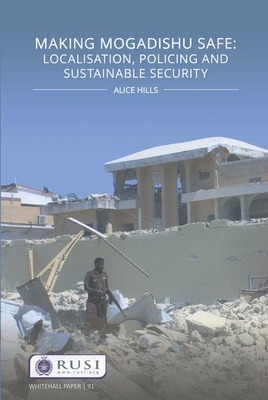 This Whitehall Paper explores the ways in which Mogadishu's inhabitants try to stay out of harm's way, from security officials in the presidential compound of Villa Somalia to the city's powerful district commissioners, from patrolling policemen to the women road-sweepers in the rubbish-filled alleyways of the Waberi district. Its central proposition is that security is best understood as a coherent relationship or activity based on the need for physical safety today, rather than in the future. It uses the neighbourhood-watch schemes developed in certain districts of Mogadishu - most notably Waberi - to understand the ways in which the city's inhabitants respond to the security models promoted by international advisers.

Alice Hills is professor of conflict studies at Durham University, where she specialises in police development, post-conflict policing and sub-state security. Before joining Durham she was professor of conflict and security at the University of Leeds. Prior to that she taught defence studies at the UK's Joint Services Command and Staff College where she specialised in urban operations and police-military relations. She has published widely on police development and on urban operations such as counter-insurgency and war fighting. Her publications include Policing Africa: Internal security and the limits of liberalization (2000); Future War in Cities: Rethinking a Liberal Dilemma (2004); Policing Post-Conflict Cities (2009) as well as numerous articles in journals including International Affairs, the British Journal of Criminology, the RUSI Journal and Stability.