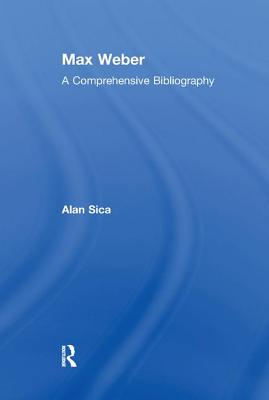 The most profound and enduring social theorist of sociology's classical period, Max Weber speaks as cogently to concerns of the new century as he did to those of the past. In Max Weber and the New Century, Alan Sica demonstrated Weber's preeminent position and lasting vitality within social theory by applying his ideas to a broad range of topics of contemporary concern. Max Weber: A Comprehensive Bibliography is a companion volume that offers some 4,600 bibliographic listings of work on Weber, making it the most complete guide to the literature in English and a testament to the continued vitality of Weber's thought.

Sica's work supersedes all previous bibliographical efforts covering the Weber literature, both in the quantity and accuracy of its references, and the clarity and convenience of its format. In order to demonstrate the enormous variety of Weberiana in English, Sica has adopted a liberal criterion for inclusion, rather than a critical one, choosing to mix the best with what may be more routine work. Following a preface in which previous bibliographies and bibliographic problems are discussed, the volume opens with a series of five specialized bibliographies. The first lists Weber's works in English translation. The second lists reviews of Weber's major works including those translated into English, while the third covers reviews of recent books and other work on Weber. The fourth section contains a selection of dissertations and theses relating to Weber or his ideas. The fifth includes primary and secondary sources treating Weber on rationality and rationalization processes. The last and largest section offers a comprehensive Weber bibliography of works in English.

This large-scale endeavor attempts to identify with accuracy and completeness the entire universe of Weber scholarship in English. It will be an essential scholarly tool for sociologists, historians, economists, and students of cultural and intellectual history.