An Essay Concerning Human Understanding. Thirty-Second Edition. with Notes and Illustrations of the Author, and an Analysis of His Doctrine of Ideas. (Paperback) 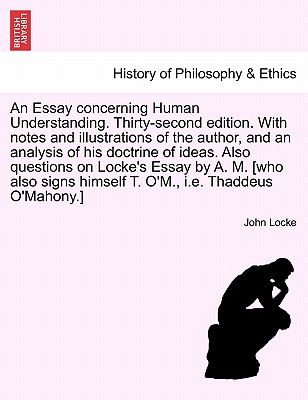 An Essay Concerning Human Understanding. Thirty-Second Edition. with Notes and Illustrations of the Author, and an Analysis of His Doctrine of Ideas. (Paperback)


Not On Our Shelves—Ships in 1-5 Days
(This book cannot be returned.)
Title: An Essay concerning Human Understanding. Thirty-second edition. With notes and illustrations of the author, and an analysis of his doctrine of ideas. Also questions on Locke's Essay by A. M. who also signs himself T. O'M., i.e. Thaddeus O'Mahony.]Publisher: British Library, Historical Print EditionsThe British Library is the national library of the United Kingdom. It is one of the world's largest research libraries holding over 150 million items in all known languages and formats: books, journals, newspapers, sound recordings, patents, maps, stamps, prints and much more. Its collections include around 14 million books, along with substantial additional collections of manuscripts and historical items dating back as far as 300 BC.The HISTORY OF PHILOSOPHY & ETHICS collection includes books from the British Library digitised by Microsoft. The works in this collection include expositions and scholarly analyses of philosophy and ethics for the earliest recorded Western religious and secular works. Documents concern prehistoric, medieval, and modern times, with background and historical narratives on Western thought. The collection provides insights into how philosophies have changed through history, what has driven these changes, and to what degree philosophical texts from prior eras are understood in the contemporary times of the authors. ++++The below data was compiled from various identification fields in the bibliographic record of this title. This data is provided as an additional tool in helping to insure edition identification: ++++ British Library Locke, John; 1881.]. xvi. 664 p.; 8 . 12269.df.1.