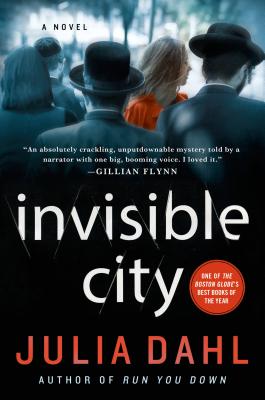 This is book number 1 in the Rebekah Roberts Novels series.

A finalist for the Edgar and Mary Higgins Clark Awards, in her riveting debut Invisible City, journalist Julia Dahl introduces a compelling new character in search of the truth about a murder and an understanding of her own heritage.

Just months after Rebekah Roberts was born, her mother, an Hasidic Jew from Brooklyn, abandoned her Christian boyfriend and newborn baby to return to her religion. Neither Rebekah nor her father have heard from her since. Now a recent college graduate, Rebekah has moved to New York City to follow her dream of becoming a big-city reporter. But she's also drawn to the idea of being closer to her mother, who might still be living in the Hasidic community in Brooklyn.

Then Rebekah is called to cover the story of a murdered Hasidic woman. Rebekah's shocked to learn that, because of the NYPD's habit of kowtowing to the powerful ultra-Orthodox community, not only will the woman be buried without an autopsy, her killer may get away with murder. Rebekah can't let the story end there. But getting to the truth won't be easy—even as she immerses herself in the cloistered world where her mother grew up, it's clear that she's not welcome, and everyone she meets has a secret to keep from an outsider.

“[An] impressive debut…Dahl's convincing dialogue and perfect pacing make for a real page-turner. And her storytelling skills illuminate the intriguing worlds of the tabloid press, Hasidism, the NYPD, and Brooklyn's 20-somethings--as well as the fragile boundaries of family, religion, and life itself.” —Publishers Weekly (starred review)

“Fast-paced, suspenseful...[Invisible City] rises above the crime-novel genre in its unusual psychological, spiritual and sociological dimensions, entering a world unfamiliar to most people.” —The Washington Post

“Bringing together the hyenas of tabloid journalism with the secretive, inwardly focused, self-protecting religious Jews, Dahl manages to demonize and humanize both, while delivering a riveting story. I sincerely hope there will be a sequel because after reading the last page, I wanted to know: What happens next?” —The Boston Globe

“Surprising and uncompromising…This is riveting stuff indeed, and Dahl is a major talent.” —BookPage