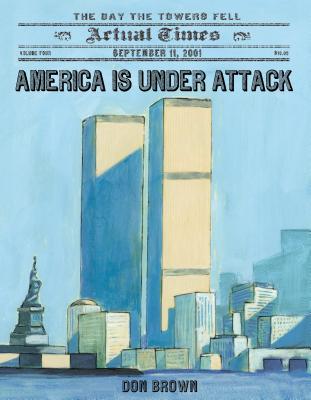 This is book number 4 in the Actual Times series.

On the ten year anniversary of the September 11 tragedy, a straightforward and sensitive book for a generation of readers too young to remember that terrible day.

The events of September 11, 2001 changed the world forever. In the fourth installment of the Actual Times series, Don Brown narrates the events of the day in a way that is both accessible and understandable for young readers. Straightforward and honest, this account moves chronologically through the morning, from the terrorist plane hijackings to the crashes at the World Trade Center, the Pentagon, and Pennsylvania; from the rescue operations at the WTC site in New York City to the collapse of the buildings. Vivid watercolor illustrations capture the emotion and pathos of the tragedy making this an important book about an unforgettable day in American history.

Don Brown’s books include The Notorious Izzy Fink, The Train Jumper, Kid Blink Beats the World, Mack Made Movies and Across a Dark and Wild Sea. He lives on Long Island, New York.

“* Illustrated on every spread with line-and-wash pictures that are forthright but never sensational, the book is superbly focused and completely honest.” —The Horn Book Magazine, starred review

“Brown's take . . . is a model of straightforward, earnest nonfiction writing that brings things to many an uncomfortable point--that cannot be avoided--without going too far.” —Booklist

“Ten years' distance from the events allows Brown to include in his carefully crafted narrative some details missing in even the best of the children's titles released closer to September 11, 2001.” —The Bulletin of the Center for Children's Books