Tudors: The History of England from Henry VIII to Elizabeth I (Paperback) 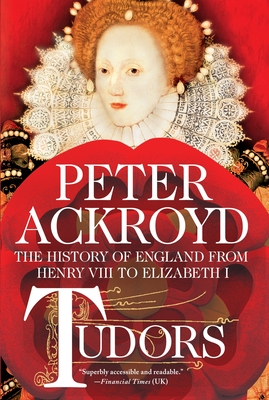 Tudors: The History of England from Henry VIII to Elizabeth I (Paperback)

This is book number 2 in the The History of England series.

Peter Ackroyd, one of Britain's most acclaimed writers, brings the age of the Tudors to vivid life in this monumental book in his The History of England series.

Tudors is the story of Henry VIII's relentless pursuit of both the perfect wife and the perfect heir; of how the brief reign of the teenage king, Edward VI, gave way to the violent reimposition of Catholicism and the stench of bonfires under "Bloody Mary." It tells, too, of the long reign of Elizabeth I, which, though marked by civil strife, plots against her, and even an invasion force, finally brought stability.

Above all, it is the story of the English Reformation and the making of the Anglican Church. At the beginning of the sixteenth century, England was still largely feudal and looked to Rome for direction; at its end, it was a country where good governance was the duty of the state, not the church, and where men and women began to look to themselves for answers rather than to those who ruled them.

“Peter Ackroyd's love of his subject shines through every page. This is a thrilling story that will delight readers interested in this period.” —San Francisco Book Review

“While the author focuses on the politics of religious change, this is an accessible account, made even more so by anecdotes revealing the personalities of the main characters (e.g., Henry VIII became so obese that his bed had to be enlarged to a width of seven feet, and Mary Stuart wore crimson underclothes at her execution in 1587).” —Publishers Weekly

“Highly engaging…. Ackroyd presents in rich prose and careful explanations how the English Reformation was not a movement of the people but a personal project of King Henry.” —Booklist (starred review)

“Peter Ackroyd is energetic and gifted enough to have mastered his sources and produced a sparklingly fresh account of Tudor England. ...Ackroyd has a wonderful eye for the telling detail, cameos that stick in the mind. ...If you want a finely written, racy account of the monster Henry VIII and his brood, a history book that really fires your imagination and is often so exciting that you cannot put it down, you should get this book.” —The Weekly Standard

“Ackroyd presents the Tudors in a way frequently overlooked by other popular histories and novels, depicting them as a force that continues to affect both English and international societies today, rather than as an early-modern soap opera. … Each player in this real-life historical drama is clearly drawn, their major contributions and connections made apparent without losing the thread of the overall themes. Tudors takes a comprehensive approach to early-modern English history that is rarely attempted, but is, in Ackroyd's hands, a success.” —Shelf Awareness

“Ackroyd writes with such lightly worn erudition and a deceptive ease that he never fails to engage.” —The Telegraph (UK)

“Ackroyd clearly relishes the wicked glamour of the family which presided over the Reformation, saw off the Spanish Armada, founded the British Empire and left the country they ruled a great European power . . . Fluent and colorful.” —Sunday Express (UK)

“As so often in Ackroyd's books there are irresistible small details of everyday life in historic London.” —Daily Express (UK)

“Ackroyd's information concerning Cromwell provokes a different reaction from that gained by reading Hilary Mantel. . . . This is a fascinating read, an accessible history where the immense research is wittily presented and where the ideas are profound and moving.” —The Newtown Review of Books(Australia)

“[Ackroyd] has a matchless sense of place, and of the transformations of place across long stretches of time; he is also an inventive and playful English stylist.” —Standpoint (UK)

“Ackroyd writes with such lightly worn erudition and a deceptive ease that he never fails to engage.” —The Telegraph (UK)