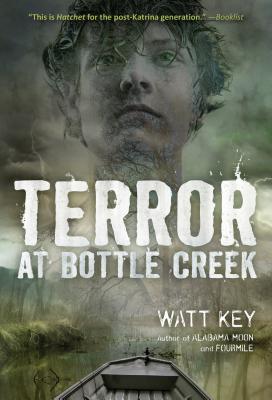 Terror at Bottle Creek by Watt Key is a harrowing survival story set in a gripping, man vs. nature situation.

“This is Hatchet for the post-Katrina generation, and it’s sure to find an audience.” —Booklist

In this gritty, realistic wilderness adventure, thirteen-year-old Cort is caught in a battle against a Gulf Coast hurricane.

Cort's father is a local expert on hunting and swamp lore in lower Alabama who has been teaching his son everything he knows. But when a deadly Category 3 storm makes landfall, Cort must unexpectedly put all his skills—and bravery—to the test.

One catastrophe seems to lead to another, leaving Cort and two neighbor girls to face the storm as best they can. Amid miles of storm-thrashed wetlands filled with dangerous, desperate wild animals, it's up to Cort to win—or lose—the fight for their lives.

This is a thrilling survivalist story by Watt Key, the author of Alabama Moon, Dirt Road Home, and Hideout.

Albert Watkins Key, Jr., publishing under the name Watt Key, is an award-winning southern fiction author. He grew up and currently lives in southern Alabama with his wife and family. Watt spent much of his childhood hunting and fishing the forests of Alabama, which inspired his debut novel, Alabama Moon, published to national acclaim in 2006. Alabama Moon won the 2007 E.B. White Read-Aloud Award, was included on Time Magazine's list of the Best One Hundred YA Books of All Time, and has been translated in seven languages.

“This is Hatchet for the post-Katrina generation, and it’s sure to find an audience.” —Booklist

“A harrowing tale of survival ... A page-turner that will have readers watching where they step and looking up into trees, long after the slithering and snorting end.” —School Library Journal

“A fast-paced adventure traces 13-year-old Cort’s daring attempt to keep two neighbor girls alive during a hurricane ... Key brings to life the eerie quality of the Alabama swampland and the hidden dangers that lurk around every corner. Short, cliffhanger chapters will keep even the most reluctant readers engrossed.” —Publishers Weekly