The Boys Who Challenged Hitler: Knud Pedersen and the Churchill Club (Paperback) 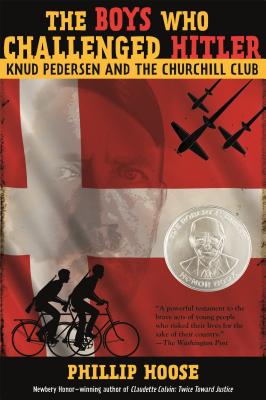 The Boys Who Challenged Hitler: Knud Pedersen and the Churchill Club (Paperback)

A true YA account of seven Danish teens who dared to fight the Nazi war machine, from a National Book Award- and Newbery Honor-winning author.

At the outset of World War II, Denmark did not resist German occupation. Deeply ashamed of his nation's leaders, fifteen-year-old Knud Pedersen resolved with his brother and a handful of schoolmates to take action against the Nazis if the adults would not. Naming their secret club after the fiery British leader, the young patriots in the Churchill Club committed countless acts of sabotage, infuriating the Germans, who eventually had the boys tracked down and arrested. But their efforts were not in vain: the boys' exploits and eventual imprisonment helped spark a full-blown Danish resistance. Interweaving his own narrative with the recollections of Knud himself, The Boys Who Challenged Hitler is National Book Award winner Phillip Hoose's inspiring story of these young war heroes.

This thoroughly-researched and documented book can be worked into multiple aspects of the common core curriculum.

Phillip Hoose is an award-winning author of books, essays, stories, songs and articles. Although he first wrote for adults, he turned his attention to children and young adults in part to keep up with his own daughters. His book Claudette Colvin won a National Book Award and was dubbed a Publisher's Weekly Best Book of 2009. He is also the author of Hey, Little Ant, co-authored by his daughter, Hannah; It’s Our World, Too!; The Race to Save the Lord God Bird; The Boys Who Challenged Hitler; and We Were There, Too!, a National Book Award finalist. He has received a Jane Addams Children’s Book Award, a Christopher Award, a Boston Globe-Horn Book Award, and multiple Robert F. Sibert Honor Awards, among numerous honors. He was born in South Bend, Indiana, and grew up in the towns of South Bend, Angola, and Speedway, Indiana. He was educated at Indiana University and the Yale School of Forestry. He lives in Portland, Maine.


“These teenagers risked all-and lost much . . . This energetic work of nonfiction . . . will cheer the hearts of readers whatever their age.” —The Wall Street Journal

“An outstanding addition to the WWII canon . . . Hoose brilliantly weaves Pedersen's own words into the larger narrative of Denmark's stormy social and political wartime climate.” —The Horn Book, starred review

“Their story is one of bravery in the face of constant danger and of increasingly meaningful acts of sabotage . . . An important and unforgettable book that adds a significant chapter to the history of WWII.” —Booklist, starred review

“What an edge-of-your-seat narrative it is-and even more compelling for teen readers, who are the same age as the real-life protagonists.” —The Bulletin, starred review