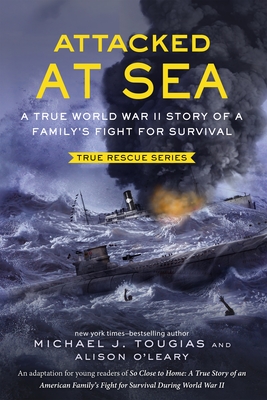 A riveting WWII account of survival at sea—Book 4 in the middle grade True Rescue series from Michael J. Tougias, the author of the New York Times bestseller The Finest Hours.

A Bank Street Best Book of the Year!

On May 19, 1942, during WWII, a U-boat in the Gulf of Mexico stalked its prey fifty miles from New Orleans. The submarine set its sights on the freighter Heredia. Most onboard were merchant seamen, but there were also civilians, including the Downs family: Ray and Ina, and their two children. Fast asleep in their berths, the Downs family had no idea that two torpedoes were heading their way. When the ship exploded, chaos ensued—and each family member had to find their own path to survival.

This inspiring historical narrative tells the story of the Downs family as they struggle against sharks, hypothermia, blinding oil, drowning, and dehydration in their effort to survive the aftermath of this deadly attack off the American coast.

Alison O'Leary is an award-winning journalist based in New England. She is a former correspondent for the Boston Globe and the author of So Close to Home, Attacked at Sea (Young Readers Edition) and Inns and Adventures.

"This exciting, highly readable story of survival deserves a place on most library shelves. Perfect for young history buffs and older fans of the “I Survived” series."--School Library Journal

"Quotes from letters and diaries evoke the historical era. A well-researched account of one American family during a little-known episode of World War II." --Kirkus Reviews

"After hours of dehydration, hypothermia, and shark threats, the survivors were sighted by plane and rescued by smaller craft . . . in this true survival story that judiciously carries forward beyond the relief of the rescue. The peril facing two children lost at sea is convincingly conveyed, and the lasting effect on their family life is equally sobering."--The Bulletin