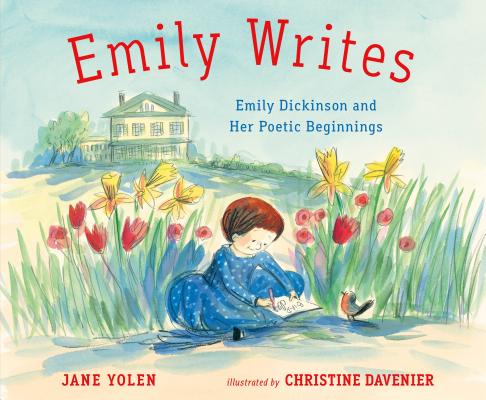 As a young girl, Emily Dickinson loved to scribble curlicues and circles, imagine new rhymes, and connect with the natural world around her. The sounds, sights, and smells of home swirled through her mind, and Emily began to explore writing and rhyming her thoughts and impressions. She thinks about the real and the unreal. Perhaps poems are the in-between.

This thoughtful spotlight on Emily’s early experimentations with poetry offers a unique window into one of the world’s most famous and influential poets.

Jane Yolen is one of the most distinguished and successful authors for young readers and adults in the country. She is the author of more than 200 books--including Briar Rose, Sister Light, Sister Dark, Owl Moon, and the immensely popular The Devil's Arithmetic. Her books have won awards including the Caldecott Medal, two Nebula Awards, the World Fantasy Award, the Jewish Book Award, and two Christopher Medals. SFWA named her the 2017 Damon KNIGHT MEMORIAL GRAND MASTER for her contributions to the literature of Science Fiction and Fantasy. She lives in Hatfield, Massachusetts.

As a young girl growing up in Tours, France, Christine Davenier loved listening to her older sister read fairy tales aloud. But she frequently found herself wondering, What does the princess’s beautiful dress look like? or How exquisite are her jewels? Christine was left to her own imagination, for the books had few illustrations. So it comes as little surprise that today, Christine embraces her career as an illustrator. “I’m thrilled to have the opportunity to create the illustrations I dreamed about seeing as a child,” she says.

When Christine was fourteen, she received her first box of watercolor paints, a gift from her grandmother. That was the beginning of many afternoons spent painting together in her grandmother’s garden. “My grandmother was an extraordinary woman,” Christine says. “Even though she worked in an office all her life, she was an artist through and through. She shared everything she knew about color—in painting and in life. Her wisdom and talent still inspire me today.”

She has illustrated many picture books, including Sally Jean, the Bicycle Queen by Cari Best. She lives in Paris, France.

"Davenier’s ink and watercolor illustrations capture a sunny, spirited moppet whose outdoor world is rife with inspiration . . . Winningly portrays a young writer who appreciates approbation but takes genuine, confident delight in her own accomplishment." —The Bulletin, starred review

"Yolen’s love of language and her knowledge of the poet’s life and work as well as her understanding of young children. . . An imaginative portrayal of the poet as a young child."—Booklist

"The imagined events of one day in the early life of Emily Dickinson foreshadow her future creations. The text moves along smoothly with plenty of appealing turns of phrase and engaging images. A warm portrait that even those unfamiliar with the iconic poet will likely enjoy."—Kirkus Reviews

"From Emily’s youthful vantage point, Yolen indirectly explains a good deal about her life and interests, allowing readers to think—just as Emily does—”about the real and the unreal” and while lies in-between (it’s poetry, according to Emily). . . The pastel-hued watercolor and ink illustrations reflect Emily’s precociousness and curiosity." —Horn Book