Climate of Hope: How Cities, Businesses, and Citizens Can Save the Planet (Paperback) 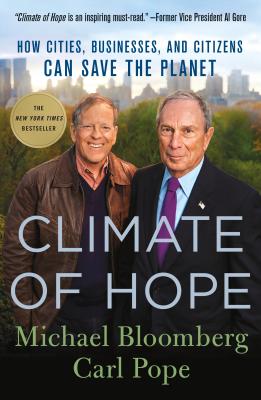 Climate of Hope: How Cities, Businesses, and Citizens Can Save the Planet (Paperback)

From Mayor Michael Bloomberg and former head of the Sierra Club Carl Pope comes a manifesto on how the benefits of taking action on climate change are concrete, immediate, and immense. They explore climate change solutions that will make the world healthier and more prosperous, aiming to begin a new type of conversation on the issue that will spur bolder action by cities, businesses, and citizens—and even, someday, by Washington.

"Climate of Hope is an inspiring must read." —Former Vice President Al Gore, Chairman of The Climate Reality Project

“Climate change threatens to reshape the future of our world's population centers. Bloomberg and Pope have been leaders on fortifying our cities against this threat, and their book proves that victory is possible—and imperative.” —Leonardo DiCaprio

"If Trump is looking for a blueprint, he could not do better than to read a smart new book, Climate of Hope." —Thomas Friedman in The New York Times

The 2016 election left many people who are concerned about the environment fearful that progress on climate change would come screeching to a halt. But not Michael Bloomberg and Carl Pope.

Bloomberg, an entrepreneur and former mayor of New York City, and Pope, a lifelong environmental leader, approach climate change from different perspectives, yet they arrive at similar conclusions. Without agreeing on every point, they share a belief that cities, businesses, and citizens can lead—and win—the battle against climate change, no matter which way the political winds in Washington may shift.

In Climate of Hope, Bloomberg and Pope offer an optimistic look at the challenge of climate change, the solutions they believe hold the greatest promise, and the practical steps that are necessary to achieve them. Writing from their own experiences, and sharing their own stories from government, business, and advocacy, Bloomberg and Pope provide a road map for tackling the most complicated challenge the world has ever faced. Along the way, they turn the usual way of thinking about climate change on its head: from top down to bottom up, from partisan to pragmatic, from costs to benefits, from tomorrow to today, and from fear to hope.

MICHAEL BLOOMBERG is the founder of Bloomberg LP, a philanthropist, the UN Secretary-General’s Special Envoy for Cities and Climate Change, and three-term mayor of New York City. His charitable foundation, Bloomberg Philanthropies, employs a unique data-driven approach, often focused on cities, to its five main focus areas: public health, education, the environment, the arts, and government innovation. A passionate supporter of action on climate change, Bloomberg is involved in multiple climate efforts, including partnering with the Sierra Club’s Beyond Coal Campaign, which aims to close half of America’s coal-powered energy production, and supporting state efforts to transition to renewable energy sources. He has served as Chair of the Sustainability Accounting Standards Board, the Task Force on Climate-related Financial Disclosures.

A veteran leader in the environmental movement, CARL POPE is the former Executive Director and Chairman of the Sierra Club. He's now the principal adviser at Inside Straight Strategies, looking for the underlying economics that link sustainability and economic development. He serves as a Senior Climate Adviser to former NYC Mayor Michael Bloomberg. He was a founder of the Blue-Green Alliance and America Votes, and has served on the Boards of Ceres, the California League of Conservation Voters, As You Sow, the National Clean Air Coalition, and California Common Cause. He is currently a member of the US-India Track II Climate Diplomacy project of the Aspen Institute. He writes regularly for Bloomberg View and Huffington Post. Mr. Pope is also the author of Sahib, An American Misadventure in India; Hazardous Waste In America; and co-author along with Paul Rauber, of Strategic Ignorance: Why the Bush Administration Is Recklessly Destroying a Century of Environmental Progress, which the New York Review of Books called "a splendidly fierce book."

"In their new book, Climate of Hope, Michael Bloomberg and Carl Pope provide readers with a wonderful, in-depth analysis of how municipalities, businesses and private citizens are proving to be a bold force in solving the greatest challenge of our time—the climate crisis. This book gives readers the opportunity to benefit from the wisdom of two highly successful individuals who have taken distinct paths to ensuring that their own communities and organizations have a tangible impact in securing our sustainable future. Climate of Hope is an inspiring must-read for anyone who wants to know how their local actions can have positive and significant impacts on the world." —Former Vice President Al Gore, Chairman of The Climate Reality Project

"If Trump is looking for a blueprint, he could not do better than to read a smart new book, Climate of Hope." —Thomas Friedman in The New York Times

“Meeting our world’s growing energy demands will require contributions from science, business and government. As Climate of Hope shows, Michael Bloomberg has a unique understanding of the importance of this collaborative approach. Michael’s leadership and optimism remind us that by working together, we can develop breakthrough innovations to reduce the cost and increase the reliability of clean energy technology.” —Bill Gates, co-chair of the Bill & Melinda Gates Foundation

“Climate change threatens to reshape the future of our world's population centers. Bloomberg and Pope have been leaders on fortifying our cities against this threat, and their book proves that victory is possible—and imperative.” —Leonardo DiCaprio

"A book that glows with the optimism of levelheaded reason. Keenly attuned to political realities, Climate of Hope bypasses the fraught debates over long-term climate change, focusing instead on the immediate consequences of pollution." —New York Magazine

“A hopeful book of strategies for delivering the planet from our worst environmental depredations. …a thoughtful, eminently reasonable set of proposals.” —Kirkus

“Upbeat, pragmatic, eloquent, and supremely well-informed, Bloomberg and Pope present striking statistics, cogently describe diverse examples of energy reforms and innovations across the U.S. and around the world, and make clear on both personal and social levels why a low-carbon future is possible, necessary, and of great benefit to everyone.” —Booklist (starred)

“[Bloomberg & Pope’s] divergent insights offer a three-dimensional examination of the crisis as well as accessible solutions, innovative suggestions and a plethora of benefits. Most importantly, their positive, forward-looking attitude is inspiring and attainable. Bloomberg and Pope's collaborative work epitomizes the unity needed to solve climate change, and they set an example to follow.” —Shelf Awareness

“Thanks in no small part to Michael Bloomberg, mayors around the world are proving day after day that cities can tackle climate change. There are three things we need to do: act, act and act again. This is the first book that explains how.” —Anne Hidalgo, mayor of Paris

“Michael Bloomberg and Carl Pope show that cities demonstrate how a bottom-up approach to climate action is not only possible, but also necessary—and how all of us have a role to play.” —Carol Browner, former EPA Administrator & White House Climate Advisor

“Climate of Hope couldn’t be more timely—or more necessary. Its optimistic and can-do spirit is exactly what made a global agreement possible. Now, Bloomberg and Pope provide a roadmap for making it a success.” —Christiana Figueres, Former Executive Secretary of the UNFCCC