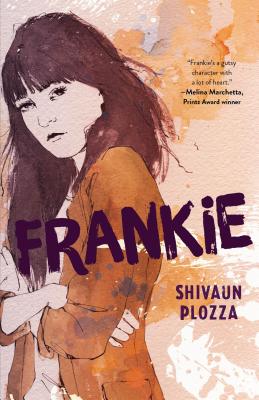 Shivaun Plozza’s debut novel, Frankie, is a genre-hopping, darkly funny novel about searching for the truth, finding yourself, and falling in love

Frankie Vega is angry. Just ask the guy whose nose she broke. Or the cop investigating the burglary she witnessed, or her cheating ex-boyfriend, or her aunt who's tired of giving second chances.

When a kid shows up claiming to be Frankie's half brother, it opens the door to a past she doesn't want to remember. And when that kid goes missing, the only person willing to help is a boy with stupidly blue eyes, a criminal record, and secrets of his own.

Frankie's search for the truth could change her life, or cost her everything.

Shivaun Plozza is an award-winning Children’s and YA writer. Her critically acclaimed debut novel, Frankie, was a CBCA Notable Book, shortlisted for the Inky Awards, Highly Commended at the Victorian Premier’s Literary Awards and won the YA category of the Davitt Awards. Her second novel is Tin Heart, which Jennifer Niven called “swoon-worthy, moving, deep, and funny.” When she’s not writing, Shivaun works as an editor and manuscript assessor. She lives in Melbourne, Australia.

“Readers will love Frankie for her courage, passion, and honesty as a narrator, and supporting characters are equally well-drawn. A powerful debut about a girl learning to love despite the dangers.” —ALA Booklist

“Frankie will make you laugh till it hurts and then she’ll break your heart. Spoiler alert: it may be with a welding gun or the collected works of Shakespeare. But no matter what she throws at you, you’ll want to keep rooting her on to the bitter end.” —Morris Award Finalist Bonnie-Sue Hitchcock, author of The Smell of Other People's Houses

“This is a great debut novel from a fantastic new Australian author. It has everything YA fiction needs to be captivating: mystery, tough women, annoyingly cute bad boys, sarcasm, and humor. Highly recommended.” —Readings Monthly