A Disappearance in Damascus: Friendship and Survival in the Shadow of War (Paperback) 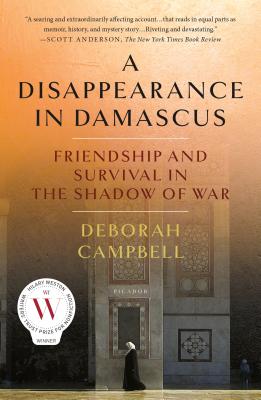 A Disappearance in Damascus: Friendship and Survival in the Shadow of War (Paperback)

In the midst of an unfolding international crisis in Syriah, renowned journalist Deborah Campbell finds herself swept up in the mysterious disappearance of Ahlam, her guide and friend. Campbell’s frank, personal account of a journey through fear and the triumph of friendship and courage is as riveting as it is illuminating.

The story begins in 2007, when Deborah Campbell travels undercover to Damascus to report on the exodus of Iraqis into Syria, following the overthrow of Saddam Hussein. There she meets and hires Ahlam, a refugee working as a “fixer”—providing Western media with trustworthy information and contacts to help get the news out. Ahlam has fled her home in Iraq after being kidnapped while running a humanitarian center. She supports her husband and two children while working to set up a makeshift school for displaced girls. Strong and charismatic, she has become an unofficial leader of the refugee community.

Campbell is inspired by Ahlam’s determination to create something good amid so much suffering, and the two women become close friends. But one morning, Ahlam is seized from her home in front of Campbell’s eyes. Haunted by the prospect that their work together has led to her friend’s arrest, Campbell spends the months that follow desperately trying to find Ahlam—all the while fearing she could be next.

The compelling story of two women caught up in the shadowy politics behind today’s most searing conflict, A Disappearance in Damascus reminds us of the courage of those who risk their lives to bring us the world’s news.

DEBORAH CAMPBELL is an award-winning writer who has reported from many countries around the world, including Iran, Syria, Jordan, Egypt, Lebanon, Israel, Palestine, Mexico, Cuba and Russia. Her work, much of which involves spending long periods of time in the societies she covers, has appeared in Harper's, The Economist, The Guardian, New Scientist, and Foreign Policy, and she is the recipient of three National Magazine Awards for her foreign correspondence. A Disappearance in Damascus: Friendship and Survival in the Shadow of War won the 2016 Hilary Weston Writers’ Trust Prize for Non-Fiction. Campbell has guest lectured at Harvard, Berkeley, Zayed University in Dubai, and the National Press Club in Washington. She teaches at the University of British Columbia.

“[A] riveting detective story… Campbell reveals the intimate relationship between journalist and fixer — and, more tellingly, unravels a darker truth about how a paranoid security service can terrorize those on both sides of a prison wall…. Even for those who don't have a personal connection to the Syrian story, Disappearance is a great read. It's a taut detective story, and an intimate account of friendship in the paranoia of a coming war.”
—Deb Amos, NPR.ORG

“I imagine that most everyone who reads A Disappearance in Damascus will come to a moment when an image suddenly clutches at his or her heart... Deborah Campbell has written a searing and extraordinarily affecting account of her experiences in Syria in the mid-2000s, one that reads in equal parts as memoir, history and mystery story... Riveting and devastating... [Campbell] has produced one of the more harrowing accounts of life inside a police state in recent memory.”
—Scott Anderson, The New York Times Book Review

“A serious, riveting work about a part of the world that too many of us know too little about... The book is steeped in atmosphere and sensual details, bringing Damascus to vibrant life, a reminder that the war-torn neighborhoods we see in the news are only one part of a sophisticated ancient world... This important book opens our eyes to the lives of the people who are trying to find peace in a world of chaos.”
—Laurie Hertzel, Minneapolis Star Tribune

“[A Disappearance in Damascus] relates an unsettling true story with journalistic adroitness and novelistic flair…. The author powerfully conveys Ahlam’s plight behind bars, injecting stark brutality into a story hitherto characterized by uncertainty and angst, and ushering the reader into a terrifying hidden dimension.”
—The Washington Post

“Gripping, inspiring, and at times intensely sorrowful, A Disappearance in Damascus provides a portrait of tremendous courage and resourcefulness within the community of Iraqi war survivors in Syria, the devastation war wreaks upon civilians, and a remarkable friendship between two women.”—PHIL KLAY, National Book Award-winning author of Redeployment

“In this compelling, moving book, Deborah Campbell unearths so much of what could have disappeared in Damascus—the outcome of the misguided and illegal war on Iraq, a fractured refugee community, reporters risking their lives to get the news out—but mainly the story of Ahlam: a brave, ironic, brilliant Iraqi fixer who bridges worlds and is mother to a community. This is a book about the power of friendship between women, about raw courage, and the political and deeply personal devastations of war.”—EVE ENSLER, author of In the Body of the World and The Vagina Monologues

“An extraordinary story of a journalist and her translator as they report on the exodus of Iraqis into Syria following the overthrow of Saddam Hussein. They both unwillingly become part of the drama which exposes the legacy of the US invasion of Iraq, the perils of reporting, the bonds of friendship and the undoing of Syria. I could not put this book down.”—ANNE GARRELS, author of Putin Country: A Journey into the Real Russia and Naked in Baghdad

“A Disappearance in Damascusis not just a thriller looking for a missing person but an urgent moral tale about a journalist’s responsibility to their sources and fixers. To her credit,Campbell goes back and does not let go.”
—BEN RAWLENCE, author of City of Thorns: Nine Lives in the World’s Largest Refugee Camp

“On the surface, [A Disappearance in Damascus] is a detective novel, a eulogy to the dying art of immersive journalism. Slightly deeper is a story of love and friendship, and the forces that can tear them apart or make them stronger. Deeper still is a political exegesis exposing the arrogance and folly of the great (and not so great) powers... Campbell deftly unravels all of these complexities, gives them a face, makes them human, so we can finally start to make sense of the incomprehensibility of the world’s most intractable conflict.”—Maclean’s (Canada)

“In a seamless blend of storytelling and reportage, Deborah Campbell’s A Disappearance in Damascus draws us into the struggles of Iraqi refugees settled in Syria after the fall of Baghdad. The principal character, an Iraqi ‘fixer’ who is also a grieving mother and a nurturing humanitarian, is taken by secret police. Campbell’s account of the search to find her, written with compelling prose, nuanced context, and intimate narration, illuminates the dangers of life and work in a conflict zone through a riveting tale of courage, loss, love, and friendship.”—2016 Hilary Weston Writers’ Trust Prize for Non-fiction jury (Carolyn Abraham, Stephen Kimber, and Emily Urquhart)

“Compelling...A bold snapshot of the Assad regime prior to the start of the war, and will give readers an idea of why so many have fought to be rid of that dictator.”—Pique (Canada)

“A vivid portrait...A must-read for people wanting to further their understanding of the Syrian civil war and refugee crisis, and about the deep ramifications that the Iraq war had on the rest of the Middle East. Especially now that the worst-case scenario that many Syrians have feared has come to pass, the book is essential to understanding the circumstances that societies lived with before their countries fell into chaos.”—Vancouver Observer (Canada)

“Paced like a good novel...A Disappearance in Damascus is vivid, provocative and timely. High-profile kidnappings, arrests and deaths of journalists and their assistants in conflict zones in the last few years have increased public awareness of the role that fixers play and the perils they face....While institutional efforts may improve protection for fixers, A Disappearance in Damascus illustrates how individual conscience and courage may also be necessary to confront the dangers of bringing news from hot spots around the world.”—Literary Review of Canada

“Deborah Campbell... [is] a sympathetic, informed, and committed investigator. [A Disappearance in Damascus] offers a detailed, personal look at the consequences of disruptive global events on the individuals most affected by them... Early on in A Disappearance in Damascus, Campbell warns against the imperial impulse to create policies that affect people ‘while knowing almost nothing of who they are or what consequences our actions might have.’ Her book successfully counters that arrogant inclination by showing us how the continuing spread of chaos has real consequences for real people.”—Quill & Quire (Canada)

“Riveting...Campbell’s book weaves the global into the utmost personal—a story of friendship flowering, then frighteningly uprooted....Campbell’s urgency to find and free Ahlam drives a narrative laced with reflections on friendship, duty, imperialism and love strained by ambition....This book took a long time to write—and clearly the results were worth the wait!”—The Tyee (Canada)