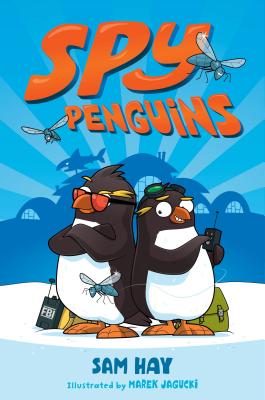 This is book number 1 in the Spy Penguins series.

Adventure-loving penguin Jackson dreams of being a secret agent like his Uncle Bryn, who works for the Frosty Bureau of Investigation. Jackson and his gadget-inventing best friend Quigley might officially be too young to join the FBI, but they aren’t going to let that stop them! They just need to come up with the right plan to prove that they are worthy.

But when one of Q’s inventions goes dangerously wrong, Jackson suddenly finds himself dropped right in the middle off an FBI stakeout. There’s fishy business afoot at the city’s aquarium; rare fish are vanishing and not even the FBI can work out what’s going on. It’s up to Jackson and Quigley to solve the crime!

Sam Hay is the author of more than forty books for children including Spy Penguins, the Undead Pets series, Star in the Jar, and the Stella and the Night Sprites series. Raised in Scotland and trained as a journalist in Edinburgh, Sam became a full-time writer when her first baby was born and now lives in Wales with her husband and two children.

Marek Jagucki, the illustrator of the My Big Fat Zombie Goldfish series, is a graduate of Falmouth School of Art and Design. He is a full-time illustrator and graphic designer based in Yorkshire, UK.

"Penguin details (“Quigley puffed up his feathers”) and humor (“There was one tiny, krill-sized problem with this plan”) by Hay (the Undead Pets series) build the world alongside cartoon illustrations by Jagucki. A quick pace, an engaging mystery, and attempted inventions—a pair of invisibility suits made of sardines that uses “the same scientific principles” as the fish—will keep readers hooked on this series opener." —Publishers Weekly

"The first in a new series, this is chock full of penguin-themed wordplay, including a popular penguin pop star named Justin Beaker. Quigley’s inventions, including an “invisibility suit” made of sardine poop, are quirky and fun, as are Jackson’s attempts to distract his mom from discovering his spy exploits. This light, funny adventure series will appeal to elementary school mystery fans." —School Library Journal

"Spy Penguins is just fun to read.... Jackson and Quigley make a great and lovable team, and the action and fast-paced storytelling will ensure that kids will want to spend time with these two – and their extended group of family and friends – again." — Mom Read It