Kingdom of Lies: Unnerving Adventures in the World of Cybercrime (Hardcover) 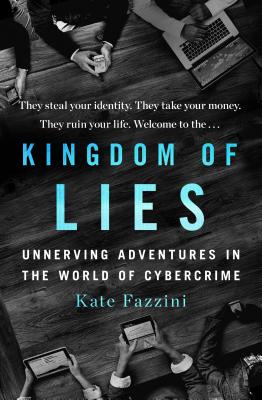 Kingdom of Lies: Unnerving Adventures in the World of Cybercrime (Hardcover)

“Wow. Kate Fazzini is the rare top-level reporter who can make you see, smell and feel a hidden world, not just understand it. Cybercrime (and security) has found its Michael Lewis.” —Bret Witter, co-author of the #1 NYT bestseller The Monuments Men

In the tradition of Michael Lewis and Tom Wolfe, a fascinating and frightening behind-the-scenes look at the interconnected cultures of hackers, security specialists, and law enforcement

A 19-year-old Romanian student stumbles into a criminal ransomware ring in her village. Soon she is extorting Silicon Valley billionaires for millions--without knowing the first thing about computers.

A veteran cybersecurity specialist has built a deep network of top notch hackers in one of the world’s largest banks. But then the bank brings in a cadre of ex-military personnel to “help.”

A cynical Russian only leaves his tiny New Jersey apartment to hack sports cars at a high performance shop in Newark. But he opens his door to a consultant who needs his help.

A hotel doorman in China once served in the People’s Army, stealing intellectual property from American companies. Now he uses his skills to build up a private side-business selling the data he takes from travelers to Shanghai’s commercial center.

Kingdom of Lies follows the intertwined stories of cybercriminals and ethical hackers as they jump from criminal trend to criminal trend, crisis to crisis. A cybersecurity professional turned journalist, Kate Fazzini illuminates the many lies companies and governments tell us about our security, the lies criminals tell to get ahead, and the lies security leaders tell to make us think they are better at their jobs than they are.

Like Traffic set in the cybercrime world, Kingdom of Lies is as entertaining as it is eye opening.

Kate Fazzini is Cybersecurity Reporter for CNBC. Before that she reported on cybersecurity for The Wall Street Journal. She previously served as a principal in the cybersecurity practice at Washington D.C.-based Promontory Financial Group, now a division of IBM. Prior to that, she served as a vice president in cybersecurity operations at JPMorgan Chase. Fazzini teaches in the applied intelligence program at Georgetown University. She lives in New York City.

"Written almost like a novel, Kingdom of Lies, offers a vivid account of how these gangs of black hat hackers spreading from Romania to China extort money from individuals like me and the most powerful Wall Street banks, and how the white hats are trying to stop these people who can halt global companies in their tracks and produce digital campaigns to sway popular opinion." —The Times (UK)

“In this vertical slice of the cybersecurity profession, CNBC reporter Fazzini gives readers an up-close look at the business of cybercrime…Fazzini effectively conveys the ways cybercrimes are constantly evolving with the capability of becoming even more insidious in the future.” —Booklist

"A breezy exploration of the many bad guys who lie in wait out on the other end of the cyberwire...Good reading for anyone contemplating a career in cybersecurity and a useful tool for turning people's thoughts in that direction." —Kirkus Reviews

"Kingdom of Lies is a brilliant and bold debut, as full of suspense as the best crime thrillers.” —Linda Fairstein, New York Times bestselling author of Blood Oath

"Kate Fazzini brings to life in easy-to-understand language the crazy, cryptic, confounding world of cybersecurity in Kingdom of Lies. Fazzini puts her substantial journalism skills to good use, working all the angles to extract the innermost thoughts of the people perpetrating cybercrimes, those trying to stop them and the enterprising souls who work both sides of the equation." —Ben DiPietro, veteran risk and anti-money laundering editor,The Wall Street Journal, Dow Jones Newswires and the Associated Press

"Kate Fazzini has crafted a gripping page-turner that is all too timely and real. Good luck putting it down — or going to sleep once you do." —Marc Guggenheim, Producer, Law & Order, and Executive Producer, Wizards

"Cybersecurity isn’t just ones and zeros, it’s also about the people who sit behind the keyboards — something Fazzini describes in vivid detail." —Naveed Jamali, former U.S. Naval Reserve intelligence officer and a reserve officer with the Defense Innovation Unit, a Silicon Valley partnership with the Department of Defense and author of How to Catch a Russian Spy

"Kate Fazzini's work breaking complex cybersecurity news down for a consumer audience is critical. She is tackling this unconventional topic by providing an alternative perspective on the threat, actors and convoluted dynamics." —Dr. Frederic Lemieux, author of Intelligence and State Surveillance in Modern Societies, and Faculty Director of the Applied Intelligence and Cybersecurity Programs, Georgetown University