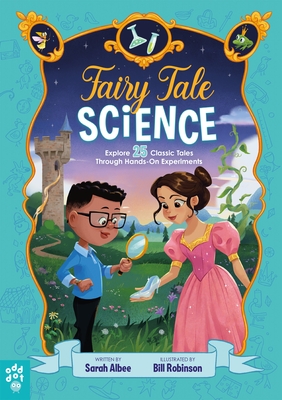 Explore the laws of physics, principles of chemistry, and wonders of biology in this collection of classic stories with a hands-on STEM twist.

From Snow White to Chicken Little to Ali Baba and the Forty Thieves—read each story like a scientist!

• Determine if a glass slipper can withstand an evening of ballroom dancing.
• Explore the buoyancy of a magical frog.
• Test the power of blowing air on a house.

And so much more!

Find out what happens actually ever after!

"A lively and captivating book." - Kirkus

Sarah Albee writes children's books for many age groups and under a number of pseudonyms. She has had three of her books appear on the New York Times bestseller list. Some of the books she's worked on are Accidental Archaeologists and Why'd They Wear That? Before she began her career as a children's book writer and editor, Sarah was a newspaper cartoonist and a semi-professional basketball player. These days she lives in Connecticut with her husband and three children.

Bill Robinson is an illustrator and character designer for animation. He has illustrated over twelve books for children, including titles based on Frozen, The Dark Crystal, and Vampirina for Random House and Disney. He is currently a character designer at DreamWorks TV (The Boss Baby: Back in Business) and has worked with Disney, Sony, Warner Bros., Reel FX, Nickelodeon, and HBO. His work can be seen in the film SCOOB! from Warner Bros. He lives with his wife, daughter, and dog in Los Angeles, California.