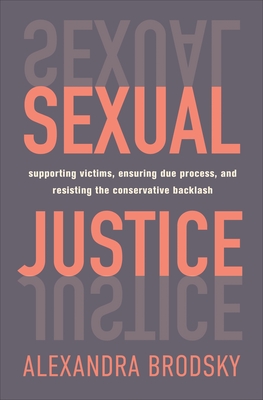 A pathbreaking work for the next stage of the #MeToo movement, showing how we can address sexual harms with fairness to both victims and the accused, and exposing the sexism that shapes today's contentious debates about due process

Over the past few years, a remarkable number of sexual harassment victims have come forward with their stories, demanding consequences for their assailants and broad societal change. Each prominent allegation, however, has also set off a wave of questions – some posed in good faith, some distinctly not – about the rights of the accused. The national conversation has grown polarized, inflamed by a public narrative that wrongly presents feminism and fair process as warring interests.

Sexual Justice is an intervention, pointing the way to common ground. Drawing on core principles of civil rights law, and the personal experiences of victims and the accused, Alexandra Brodsky details how schools, workplaces, and other institutions can – indeed, must – address sexual harms in ways fair to all. She shows why these allegations cannot be left to police and prosecutors alone, and outlines the key principles of fair proceedings outside the courts. Brodsky explains how contemporary debates continue the long, sexist history of “rape exceptionalism,” in which sexual allegations are treated as uniquely suspect. And she calls on readers to resist the anti-feminist backlash that hijacks the rhetoric of due process to protect male impunity.

Vivid and eye-opening, at once intellectually rigorous and profoundly empathetic, Sexual Justice clears up common misunderstandings about sexual harassment, traces the forgotten histories that underlie our current predicament, and illuminates the way to a more just world.

Alexandra Brodsky is a civil rights lawyer with deep ties to the student movement to end campus gender violence. She holds a J.D. from Yale Law School and clerked for the Honorable Marsha S. Berzon on the U.S. Court of Appeals for the Ninth Circuit. Brodsky has written about sexual assault for the New York Times, the Guardian, the Washington Post, and the Atlantic, among many other publications. She lives in New York.

“Clarifying and instructive... Deserves to be read by everyone responsible for building the systems that regulate how people behave toward one another.”
—The New York Times Book Review

“Groundbreaking... Sexual Justice is here to answer every bad-faith question, to radically change the way we think about sexual violence and survivor justice.”
—Rewire

“Too often, the mantra ‘What about due process?’ is used to misdirect from a high-profile allegation of sexual harm, not express genuine concern for fairness. But attorney and anti-sexual-violence activist Alexandra Brodsky’s Sexual Justice dares to ask the question in good faith.... Brodsky is the gifted and thoughtful heir to Catharine MacKinnon.”
—New York

“In many ways, Sexual Justice is a breath of fresh air. Skipping many of the moral debates surrounding sexual violence, Brodsky, a civil rights lawyer, looks for solutions. With a survey of the past and present of sexual abuse adjudication procedures, she looks at what’s working (very little), why sexual violence is treated so much differently than other kinds of harm, and what a viable reporting path for survivors might look like.”
—Bookforum

“An accessible but deeply packed mix of the theoretical and the practical. Brodsky’s dense volume is rife with pertinent examples of justice denied and justice achieved. At its core are concrete suggestions for institutions, including schools and workplaces.”
—The Progressive

“Brodsky offers a clear-eyed assessment of how to improve the adjudication of sexual harassment claims within schools, businesses, and other institutions... A balanced look at how to address a thorny problem.”
—Publishers Weekly

“Sexual harassment and assault are far too common, leaving behind shattered lives and tattered institutions. Still, there is hope. In terms both compassionate and practical, Sexual Justice outlines actionable approaches for mitigating and responding to sexual harm. This unique book rests on a deep foundation of empathy while mapping impressive strategies for fairness. It is a must-read, as important for higher education as for corporate America, as relevant to the nonprofit sector as to Hollywood movie sets.”
—Melissa Harris-Perry, media host and author of Sister Citizen

“An informative, insightful, and profoundly clarifying exploration of the complex issues crucial to securing sexual justice for all. This is the #MeToo book we’ve been waiting for, to point the way forward with intelligence and compassion. It has made me feel optimistic about the future for the first time in a long time.”
—Alexandra Schwartz, staff writer at The New Yorker

“Alexandra Brodsky’s important book marks a crucial point in feminist advocacy, lucidly and bravely showing us how to embrace due process for sexual harassment victims and for the accused. ‘We can care about multiple things at once. We must,’ she boldly tells us. Brodsky’s vision is vital and necessary as we move into future phases of the fight for accountability, fairness, and equality.”
—Jeannie Suk Gersen, professor, Harvard Law School

“Sexual Justice is an essential intervention in a conversation that too often gets clouded by biases, assumptions, and myths. Brodsky is a lucid, compelling, and empathetic writer, with an unwavering ethical compass and a bone-deep commitment to fairness. This isn’t just an accomplished book, but a deeply necessary one. It will be a better world for women if more people read it.”
—Moira Donegan, columnist for The Guardian

“Alexandra Brodsky is an incisive and elegant cartographer of the conflicting spheres of cultural, institutional, and criminal justice. Where there is cause for rage, she smolders, but it’s the force of her analysis that does the work. Where there is cause for hope, she offers frameworks for dialogue and progress. Sexual Justice should become a central part of national discourse around sexual harassment and assault. It is expansive and brilliant; it also, in its careful assessment of harm and the sequelae of assault, offers real support for people who have experienced these injuries. A critical contribution that shifted my understanding of my own experience and the ongoing fight for justice.”
—Lacy Crawford, author of Notes on a Silencing