2030: How Today's Biggest Trends Will Collide and Reshape the Future of Everything (Paperback) 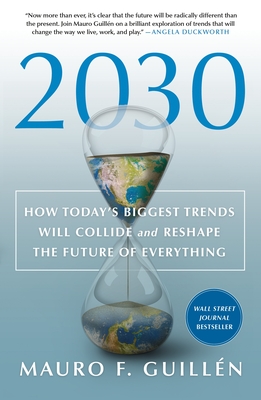 2030: How Today's Biggest Trends Will Collide and Reshape the Future of Everything (Paperback)

"Bold, provocative...illuminates why we’re having fewer babies, the middle class is stagnating, unemployment is shifting, and new powers are rising.”
—ADAM GRANT

The world is changing drastically before our eyes—will you be prepared for what comes next? A groundbreaking analysis from one of the world's foremost experts on global trends, including analysis on how COVID-19 will amplify and accelerate each of these changes.

Once upon a time, the world was neatly divided into prosperous and backward economies. Babies were plentiful, workers outnumbered retirees, and people aspiring towards the middle class yearned to own homes and cars. Companies didn't need to see any further than Europe and the United States to do well. Printed money was legal tender for all debts, public and private. We grew up learning how to "play the game," and we expected the rules to remain the same as we took our first job, started a family, saw our children grow up, and went into retirement with our finances secure.

That world—and those rules—are over.

All these trends, currently underway, will converge in the year 2030 and change everything you know about culture, the economy, and the world.

According to Mauro F. Guillen, the only way to truly understand the global transformations underway—and their impacts—is to think laterally. That is, using “peripheral vision,” or approaching problems creatively and from unorthodox points of view. Rather than focusing on a single trend—climate-change or the rise of illiberal regimes, for example—Guillen encourages us to consider the dynamic inter-play between a range of forces that will converge on a single tipping point—2030—that will be, for better or worse, the point of no return.

2030 is both a remarkable guide to the coming changes and an exercise in the power of “lateral thinking,” thereby revolutionizing the way you think about cataclysmic change and its consequences.

Mauro F. Guillén is one of the most original thinkers at the Wharton School, where he holds the Zandman Professorship in International Management and teaches in its flagship Advanced Management Program and many other courses for executives, MBAs, and undergraduates. An expert on global market trends, he is a sought-after speaker and consultant. He combines his training as a sociologist at Yale and as a business economist in his native Spain to methodically identify and quantify the most promising opportunities at the intersection of demographic, economic, and technological developments. His online classes on Coursera have attracted over 100,000 participants from around the world. He has won multiple teaching awards at Wharton, where his presentation on global market trends has become a permanent feature of over fifty executive education programs annually. His previous books include The Architecture of Collapse, Global Turning Points, and Emerging Markets Rule.