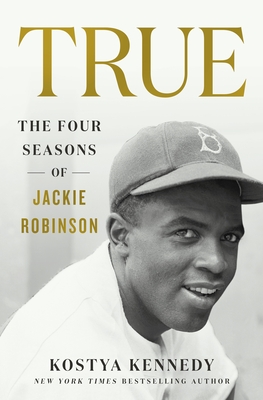 True is a probing, richly-detailed, unique biography of Jackie Robinson, one of baseball's—and America's—most significant figures.

For players, fans, managers, and executives, Jackie Robinson remains baseball’s singular figure, the person who most profoundly extended, and continues to extend, the reach of the game. Beyond Ruth. Beyond Clemente. Beyond Aaron. Beyond the heroes of today. Now, a half-century since Robinson’s death, letters come to his widow, Rachel, by the score. But Robinson’s impact extended far beyond baseball: he opened the door for Black Americans to participate in other sports, and was a national figure who spoke and wrote eloquently about inequality.

True: The Four Seasons of Jackie Robinson by Kostya Kennedy is an unconventional biography, focusing on four transformative years in Robinson's athletic and public life: 1946, his first year playing in the essentially all-white minor leagues for the Montreal Royals; 1949, when he won the Most Valuable Player Award in his third season as a Brooklyn Dodger; 1956, his final season in major league baseball, when he played valiantly despite his increasing health struggles; and 1972, the year of his untimely death. Through it all, Robinson remained true to the effort and the mission, true to his convictions and contradictions.

Kennedy examines each of these years through details not reported in previous biographies, bringing them to life in vivid prose and through interviews with fans and players who witnessed his impact, as well as with Robinson's surviving family. These four crucial years offer a unique vision of Robinson as a player, a father and husband, and a civil rights hero—a new window on a complex man, tied to the 50th anniversary of his passing and the 75th anniversary of his professional baseball debut.

KOSTYA KENNEDY is an editorial director at Dotdash Meredith and a former senior writer at Sports Illustrated. He is the New York Times bestselling author of 56: Joe DiMaggio and the Last Magic Number in Sports (runner-up for the 2012 PEN/ESPN Award for Literary Sports Writing) and Pete Rose: An American Dilemma. Both won the CASEY Award for Best Baseball Book of the Year. He has taught at Columbia and NYU, and lives with his wife and daughters in Westchester County, New York.

"[Kennedy] brings to life Robinson’s greatness as a player as well as providing perspective on his place in American history for his dedication and determination for civil rights. . .the story of... [a] groundbreaking moment in baseball’s — and the country’s — history." -- The San Diego Union Tribune


"This is a marvelous addition to the library on the ever-important, ever-enigmatic Jackie Robinson, one of the towering figures in the Civil Rights Movement. Kennedy has given us four remarkable ‘snapshots’ of Jackie at this most brave and vulnerable moment."
-- Ken Burns, filmmaker

"True is a captivating reminder of Jackie Robinson’s greatness not only as a baseball player and trailblazer, but also as a fearless activist for the equal rights and fair treatment of all people. Reading it, I said to myself time and again: “I wish I could have met him.”
--John Grisham

"In these latter days, when Jackie Robinson's titanic sports legacy can be expressed in more nuanced human terms, and in terms of the struggle for human rights, Kennedy's restrained, patient, immensely readable biography might well be where a younger generation -- grown curious about the great Robinson -- can commence."
--Richard Ford

"There has been so much written and said about Jackie Robinson that one might think that there is nothing left to say. But Kostya Kennedy's True: The Four Seasons of Jackie Robinson not only offers an innovative approach to biographical writing but fresh insights and information about Robinson. Even what we thought we knew is cast in a new context. An absolutely fascinating and compelling read. A truly masterful book."
--Gerald Early, author of A Level Playing Field: African American Athletes and the Republic of Sports

"Once again, the excellent Kostya Kennedy has found a unique way of vivifying the life of one of baseball's most imposing figures. But, unlike his previous biographies of Joe DiMaggio and Pete Rose, this one is devoted to someone whose impact on the game -- and on our national culture -- has only intensified since his playing days. True befits the greatness of the man whose life it chronicles."
--Daniel Okrent, author of Nine Innings, Last Call, Great Fortune (finalist for the Pulitzer Prize in History), and The Guarded Gate

"The 75th anniversary of the day Jackie Robinson became the first Black man to play in the Major Leagues is the perfect time to remember a great baseball player and an even greater American. Kostya Kennedy’s True tells Robinson’s story beautifully, a sweeping narrative rich in detail and full of riveting and important stories that should be told and retold for generations."
--Christine Brennan, USA Today sports columnist and bestselling author of Inside Edge

"An idiosyncratic and heartfelt lookat the enduring legacy of sports pioneer Jackie Robinson ... Lyrical throughout, Kennedy's narrative radiates with reverence and ends on a resonate note with his description of Robinson's funeral procession in Harlem ... Baseball fans shouldn't miss this.” --Publishers Weekly

"Kennedy brings literary grace to his subject, illuminating Robinson's sizzling style on the ballfield, his colossal significance in American culture, his complex humanity and his enduring legacy ... he paints lush portraits of telling moments from Robinson's career ... and renders the everyday indignities and terrifying death threats during spring training in the Jim Crow South ... True explains Robinson in striking, human terms." -- Aram Goudsouzian, The Washington Post

"An appreciative biography of Jackie Robinson ... A sturdy combination of sportwriting and social history." -- Kirkus

"What emerges from True above all is that Robinson was baseball's man for all seasons, a mixture of great conscience, great grace and, not least, astonishing physical skill ... Mr. Kennedy's chronicle is less a biography of man than a story of a distant time ... True pays homage to a beautiful game." -- David M. Shribman, The Wall Street Journal

"An unconventional biography of the baseball legend. The author writes about the four most important years of Robinson's life ... Kennedy notes that Robinson was not only an incredible baseball player but also an outstanding person who endured much throughout his life and career and paved the way for so many athletes today ... A fantastic, well-written biography; fans of baseball and of Robinson's career (on or off the field) must read this captivating book." -- Gus Palas, Library Journal