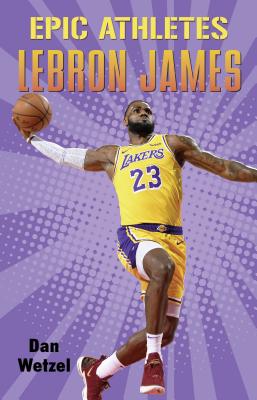 This is book number 5 in the Epic Athletes series.

Whether you call him King James or simply LeBron, one thing is certain: LeBron James is THE face of the NBA. At just eighteen, and facing sky-high expectations, LeBron headed straight from high school to the pros. Cool under pressure, he went on to shatter the record books and become the most popular athlete in America.

Yet nothing was ever handed to LeBron. As a kid, he had to move homes constantly, even separating from his mother for a time. But through all the adversity, he took his natural talent and combined it with hard work to set himself on a path to greatness. Filled with sports action and bold illustrations, this exciting biography tells the story of a living NBA legend.

* "Wetzel knows how to organize the facts and tell a good story. His insights into high school, collegiate, and professional basketball, along with his use of well-chosen quotes from insiders, make this book an unusually informative and enjoyable sports biography for young readers." —Booklist, starred review for Epic Athletes: Stephen Curry