From Warsaw with Love: Polish Spies, the CIA, and the Forging of an Unlikely Alliance (Hardcover) 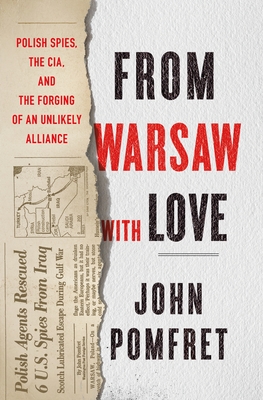 From Warsaw with Love: Polish Spies, the CIA, and the Forging of an Unlikely Alliance (Hardcover)

From Warsaw with Love is the epic story of how Polish intelligence officers forged an alliance with the CIA in the twilight of the Cold War, told by the award-winning author John Pomfret.

Spanning decades and continents, from the battlefields of the Balkans to secret nuclear research labs in Iran and embassy grounds in North Korea, this saga begins in 1990. As the United States cobbles together a coalition to undo Saddam Hussein’s invasion of Kuwait, six US officers are trapped in Iraq with intelligence that could ruin Operation Desert Storm if it is obtained by the brutal Iraqi dictator. Desperate, the CIA asks Poland, a longtime Cold War foe famed for its excellent spies, for help. Just months after the Polish people voted in their first democratic election since the 1930s, the young Solidarity government in Warsaw sends a veteran ex-Communist spy who’d battled the West for decades to rescue the six Americans.

John Pomfret’s gripping account of the 1990 cliffhanger in Iraq is just the beginning of the tale about intelligence cooperation between Poland and the United States, cooperation that one CIA director would later describe as “one of the two foremost intelligence relationships that the United States has ever had.” Pomfret uncovers new details about the CIA’s black site program that held suspected terrorists in Poland after 9/11 as well as the role of Polish spies in the hunt for Osama bin Laden.

In the tradition of the most memorable works on espionage, Pomfret’s book tells a distressing and disquieting tale of moral ambiguity in which right and wrong, black and white, are not conveniently distinguishable. As the United States teeters on the edge of a new cold war with Russia and China, Pomfret explores how these little-known events serve as a reminder of the importance of alliances in a dangerous world.

John Pomfret, a finalist for the Pulitzer Prize, served as a correspondent for the Washington Post for two decades, covering wars, revolutions, and China. His recent book, The Beautiful Country and the Middle Kingdom, won the Arthur Ross Book Award from the Council on Foreign Relations. The recipient of numerous journalism awards, he lives with his wife and three children in Berkeley, CA.

“Pomfret's book is eye-opening in the best sense…colorful…disquieting.”
—The Washington Post

“Suspenseful…well worth picking up—an engaging story of how spies on opposite sides of the Cold War came together, with plenty of riveting detail from participants in the events.”
—NPR

“An eye-opening account of America’s relations with Poland and its intelligence service…A lively and insightful exploration of an overlooked international alliance.”
—Kirkus Reviews, *starred review*

“Written in crisp, novelistic prose, this is an insightful study of the ins and outs of international spycraft.”
—Publishers Weekly

“In his revealing behind-the-scenes account…Pomfret draws strong portraits of principal spies and diplomats on both sides, and recounts significant events, including Poland’s daring rescue of six high-value American diplomats from Kuwait during the Gulf War. All in all, an important contribution to the study of U.S.-European relations.”
—Booklist

“Utilizing countless former CIA, Polish and US government sources, Pomfret masterfully describes…a fascinating and important story in a highly readable and compelling fashion…[A] must read for those interested not only in Polish-American relations, but also those interested in gaining a deeper and more profound understanding of intelligence liaison relationships and the idiosyncrasies inherent therein.”
—The Cipher Brief

“From Warsaw With Love is much more than a spy story…It’s a tale rich with historical accounts based on the highly regarded journalist’s interviews of former agents and officials and declassified Polish archives as well as contemporary observations of U.S.-Polish relations and the broader lessons of their secret partnership…It’s a masterpiece of historical investigative reporting.”
—SpyTalk

“Hold onto your hats for a journey of espionage, bravery, great escapes and jolting change at the hands of Polish and American intelligence officers. John Pomfret’s From Warsaw With Love takes you on a gripping roller-coaster ride through the final years of the Cold War and into the blinding sunlight of a new age. This is an odyssey not to be missed.”
—David E. Hoffman, Pulitzer-prize winning author of The Billion Dollar Spy: A True Story of Cold War Espionage and Betrayal

“Put down your John le Carré, Pomfret’s book is the real deal.”
—Alex Storozynski, Chairman of the Kosciuszko Foundation and author of The Peasant Prince: Thaddeus Kosciuszko and the Age of Revolution

“From Warsaw with Love is a real-life and riveting spy story. John Pomfret reveals how American spymasters seduced the Poles away from the embrace of the KGB, and enlisted them in American adventures and misadventures from Iraq to North Korea to a CIA black site. The cast of characters comes wonderfully alive. I loved this book and learned so much.”
—Barbara Demick, author of Eat the Buddha: Life and Death in a Tibetan Town and Nothing to Envy: Real Lives in North Korea

“From Warsaw With Love is more than an amazing piece of reporting. It deserves to be read by as many as possible.”
—Nicholas Meyer, author of The Seven-Per-Cent Solution and director of Star Trek ll: The Wrath of Khan and Time After Time

“An astonishing account of one of the most consequential spy-agency collaborations since the Cold War. Fast-paced, with startling revelations and exquisite storytelling, From Warsaw with Love is a portrait of an unlikely and largely secretive relationship between Americans and Poles, spanning dozens of operations ranging from daring rescue missions to a ‘black site’ prison for suspected terrorists. For Poland, the journey underscores the rewards and occasionally painful costs of loyalty.”
—Joby Warrick, Pulitzer-prize winning author of Black Flags: The Rise of ISIS

“Sometimes former enemies make the best of friends…Brilliant reporting that reveals a riveting and untold chapter of our modern history.”
—Samuel M. Katz, New York Times bestselling author of Under Fire: The Untold Story of the Attack in Benghazi

“In an age of cyber attacks and satellite surveillance, the central role of human intelligence can be lost and forgotten. Through spy tales riveting to experts and novices alike, John Pomfret reminds us of the harrowing and sometimes shocking work of operatives in the little-known but enormously impactful partnership between US and Polish intelligence. From Iraq to Afghanistan to Europe and beyond, the former adversaries had thrilling victories, agonizing misses, and troubling betrayals.”
—Jim Sciutto, Anchor and Chief National Security Correspondent for CNN