A Crown So Cursed (The Nightmare-Verse #3) (Hardcover) 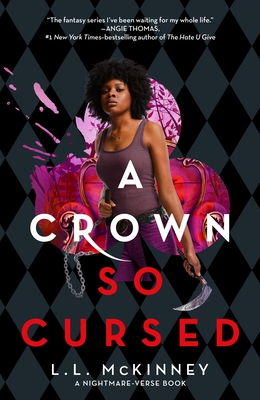 A Crown So Cursed (The Nightmare-Verse #3) (Hardcover)

This is book number 3 in the The Nightmare-Verse series.

"The fantasy series I've been waiting for my whole life."
—Angie Thomas, #1 New York Times-bestselling author of The Hate U Give

Alice must save Wonderland from itself in A Crown So Cursed, the long-awaited third book in L.L. McKinney's Nightmare-Verse series.

Alice and her crew are doing their best to recover from the last boss battle, but some of them keep having these. . . dreams: visions of a dark past—and an even darker future. Sadly, the evil in Wonderland may not be as defeated as they’d hoped.

Attacked by Nightmares unlike any they’ve ever seen, Alice will have to step between the coming darkness and the mortal world once more. But this time is different. This time, the monsters aren’t waiting for her on the other side of the Veil.

They're in her own back yard.

Named one of The Root’s 100 Most Influential African-Americans of 2020, L.L. McKinney is a writer, a poet, and an active member of the kidlit community. She’s an advocate for equality and inclusion in publishing, the co-founder of Juneteenth Book Fest, and the creator of the hashtags #PublishingPaidMe and #WhatWOCWritersHear. She’s also a gamer girl and an adamant Hei Hei stan. She is the author of A Blade So Black, A Dream So Dark, and A Crown So Cursed.

"With memorable characters and page-turning thrills, the Nightmare-Verse is the fantasy series I've been waiting for my whole life. Alice is Black Girl Magic personified."
—Angie Thomas, #1 New York Times-bestselling author of The Hate U Give


Praise for A Dream So Dark

"The Alice I never knew I needed. The Alice I was missing. McKinney conjures a Wonderland for those of us who weren’t given the looking glass. It is a feat of black girl magic!"
—Dhonielle Clayton, New York Times-bestselling author of The Belles

"McKinney’s follow-up to A Blade So Black proves she is a master of urban fantasy... Explosive from start to finish and guaranteed to send readers gleefully down a rabbit hole from which they’ll emerge begging for a third installment." —Booklist, starred review


Praise for A Blade So Black

"This really is Lewis Carroll by way of Buffy, and it makes for a fun, gritty urban fantasy." —NPR

"I loved the 'our world' framing and the 'other world' adventure so deeply. They were at such odds, but the overall effect was just chefkiss.gif perfect."
—E.K. Johnston, #1 New York Times-bestselling author of Star Wars: Ahsoka and A Thousand Nights

"Wholly original and absolutely thrilling—A Blade So Black kicks so much (looking gl)ass."
—Heidi Heilig, author of The Girl From Everywhere

"A dark, thrilling fantasy-meets-contemporary story with a kickass heroine." —Bustle

"Retold fairy tales have been a popular trend... but you’ve never read one quite like A Blade So Black." —Nerdist

"A brash, refreshing, vitally diverse retelling of a classic... You need this book." —Tor.com

"A Blade So Black is a novel that roars mightily in the face of all those Wonderland tales that have come before. L.L. McKinney is on her way to someplace special with this debut; get onboard now." —Locus magazine

"This isn't a retelling, this is Alice in Wonderland 2.0." —BlackSci-Fi.com

"Relentless action, spiraling stakes, and a fierce heroine... A heartbreaking cliffhanger will leave fans clamoring for a sequel." —Publishers Weekly

"A thrilling, timely novel that ensures readers will be curious for a sequel." —Kirkus Reviews

"With a modern flair, a rich backstory, and just enough emotional heft, this particular looking glass will have readers eagerly falling through it." —The Bulletin

"Teens will root for Alice as a strong, multidimensional black girl usually unseen in YA fiction... A must-purchase." —School Library Journal

"A Blade So Black is a modernized version of a well-known story that retains enough of the original to be lauded by both fans of the classic and readers wholly new to Wonderland." —Shelf Awareness