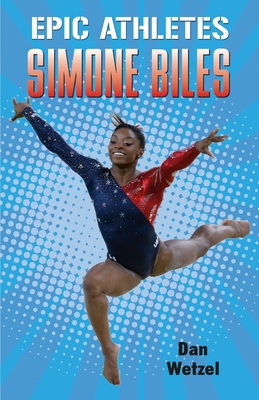 This is book number 7 in the Epic Athletes series.

At the 2016 Summer Olympics, Simone Biles dazzled gymnastics fans across the globe with each jaw-dropping flip, twist, and dismount. Her record-breaking performance catapulted her to the top of the sport, and she quickly became a hero to young people.

But well before Simone faced Olympic trials on the balance beam and rings, she confronted real-life challenges as a kid, as she moved in and out of foster care. With the support and love of her grandparents, plus her unwavering drive to make history on the ultimate stage in sports, she grew into an incredible role model and activist—and one of the greatest athletes of our time.

Filled with sports action and bold comic-style illustrations, this inspiring biography recounts the incredible life of a world class gymnast.

* "Wetzel knows how to organize the facts and tell a good story. . . an unusually informative and enjoyable sports biography for young readers." —Booklist, STARRED review of Epic Athletes: Stephen Curry

New York Times bestselling author Dan Wetzel has been a Yahoo Sports national columnist since 2003. He's covered events and stories around the globe, including college football, the NFL, the MLB, the NHL, the NBA, the UFC, the World Cup, and the Olympics. For years, he's been called America's best sports columnist, appeared repeatedly in the prestigious Best American Sports Writing, and been honored more than a dozen times by the Associated Press Sports Editors. Dan was recently inducted into the U.S. Basketball Writers Hall of Fame. His coauthored books include Glory Road with NCAA basketball coach Don Haskins (basis for the Disney movie of the same name), and several other sports memoirs.
"Wetzel knows how to organize the facts and tell a good story. His insights into high school, collegiate, and professional basketball, along with his use of well-chosen quotes from insiders, make this book an unusually informative and enjoyable sports biography for young readers." —Booklist, starred review of Epic Athletes: Stephen Curry