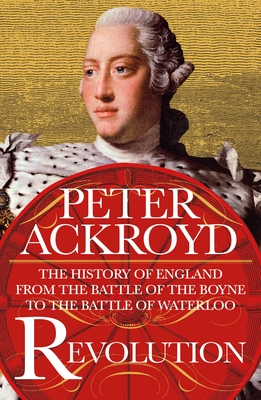 This is book number 4 in the The History of England series.

The fourth volume of Peter Ackroyd's enthralling History of England, beginning in 1688 with a revolution and ending in 1815 with a famous victory.

In Revolution, Peter Ackroyd takes readers from William of Orange's accession following the Glorious Revolution to the Regency, when the flamboyant Prince of Wales ruled in the stead of his mad father, George III, and England was—again—at war with France, a war that would end with the defeat of Napoleon at Waterloo.

Late Stuart and Georgian England marked the creation of the great pillars of the English state. The Bank of England was founded, as was the stock exchange; the Church of England was fully established as the guardian of the spiritual life of the nation, and parliament became the sovereign body of the nation with responsibilities and duties far beyond those of the monarch.

It was a revolutionary era in English letters, too, a time in which newspapers first flourished and the English novel was born. It was an era in which coffee houses and playhouses boomed, gin flowed freely, and in which shops, as we know them today, began to proliferate in towns and villages. But it was also a time of extraordinary and unprecedented technological innovation, which saw England utterly and irrevocably transformed from a country of blue skies and farmland to one of soot and steel and coal.

Ackroyd is the author of the first, second, and third volumes of his History of England, Foundation, Tudors, and Rebellion.

"Through it all, the author is a delightful guide. All chroniclers of popular history should be required to study Ackroyd's writing, his methodology, and the totality of his treatment of his subjects." —Kirkus Starred Review

“Ackroyd (Rebellion) continues his fast-paced overview of the tumultuous English monarchy with the fourth volume in the series, an account of the "long 18th century" (1688–1815) that covers the evolution of literature, trade, technology, and politics…Ackroyd offers suitable background on the momentous events and key figures that helped create modern Britain.” —Publishers Weekly

“[T]he author eschews the detached third person preferred by stuffy professionals, favouring instead a more intimate 'you' that brings the reader into the dark alleys of industrial towns.” —The Times

"For Ackroyd, the past isn't merely past; it's alive." —The Boston Globe

"Ackroyd is a medium through which the obscured voices of the past are channeled." —Newsday