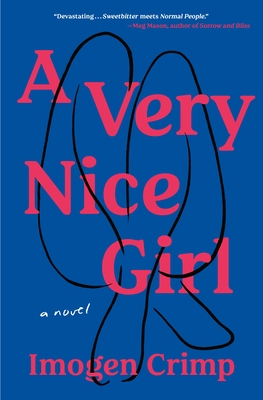 A bitingly honest, darkly funny debut about ambition, sex, power, and love, Imogen Crimp's A Very Nice Girl cracks open the timeless questions of what it is to be young, what it is to want to be wanted, and what it is to find your calling but lose your way to it.

Anna doesn’t fit in. Not with her wealthy classmates at the selective London Conservatory where she unexpectedly wins a place after university, not with the family she left behind, and definitely not with Max, a man she meets in the bar where she sings for cash. He’s everything she’s not—rich, tailored to precision, impossible to read—and before long Anna is hooked, desperate to hold his attention, and determined to ignore the warning signs that this might be a toxic relationship.

As Anna shuttles from grueling rehearsals to brutal auditions, she finds herself torn between two conflicting desires: the drive to nurture her fledgling singing career, which requires her undivided attention, and the longing for human connection. When the stakes increase, and the roles she’s playing—both on stage and off—begin to feel all-consuming, Anna must reckon with the fact that, in carefully performing what’s expected of her as a woman, she risks losing sight of herself completely.

Both exceedingly contemporary and classic, A Very Nice Girl reminds us that even once we have taken possession of our destinies we still have the power to set all we hold dear on fire.

Imogen Crimp studied English at Cambridge, followed by an MA in contemporary literature from University College London, where she specialized in female modernist writers. After university, she briefly studied singing at a London conservatory. She lives in London. She is the author of A Very Nice Girl.

"Imogen Crimp's enjoyable debut novel . . . is an all-too-real reminder of what it is to be a woman in your 20s, searching for who you are, trying on identities or stuck in a complicated pseudo-relationship even when you know you shouldn’t be. It’s a book about assessing your worth through other people’s eyes—parents, friends, a lover—and about being observed: by an overprotective mother, by men on the tube, by those who assess her auditions, by classmates competing for her slot, and ultimately by the audience."
—The New York Times

"With some steamy sex scenes in the mix, Crimp feels like she’s channeling something of the Sally Rooney style: interior and complex, but also unafraid to incorporate corporeal forces among all the others that govern us. This is high-class romance at its best."
—Vogue

"A blazing, darkly funny debut that captures a young woman's search to find herself both through love and performing opera—and the way one fights to cancel out the other. It has an honesty and tenderness that will stay with me for a long time."
—Rachel Joyce, New York Times bestselling author of Miss Benson's Beetle and The Unlikely Pilgrimage of Harold Fry

"In A Very Nice Girl, Imogen Crimp explores complicated relationships, the creative life, and the challenges of living in London in your twenties, with precision and subtlety. Touching on feminism, power, finances, and the pleasures and dangers of a new relationship, this book is an assured debut."
—Claire Fuller, author of Unsettled Ground

"An exquisitely detailed novel—Crimp absolutely nails the intricate inner workings of the opera world. Humorous, biting, and unnervingly honest, the story explores one young woman’s path to finding herself."
—Addie Woolridge, author of The Checklist

"Imogen Crimp captures the glittering thrill of being young and choosing your own life with a dark, unflinching undercurrent of desire, power and control."
—Jessica Andrews, author of Saltwater