The People, No: A Brief History of Anti-Populism (Paperback) 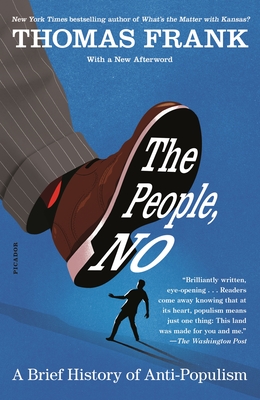 The People, No: A Brief History of Anti-Populism (Paperback)

From the prophetic author of the now-classic What’s the Matter with Kansas? and Listen, Liberal, an eye-opening account of populism, the most important—and misunderstood—movement of our time.

Rarely does a work of history contain startling implications for the present, but in The People, No Thomas Frank pulls off that explosive effect by showing us that everything we think we know about populism is wrong. Today “populism” is seen as a frightening thing, a term pundits use to describe the racist philosophy of Donald Trump and European extremists. But this is a mistake.

The real story of populism is an account of enlightenment and liberation; it is the story of American democracy itself, of its ever-widening promise of a decent life for all. Taking us from the tumultuous 1890s, when the radical left-wing Populist Party—the biggest mass movement in American history—fought Gilded Age plutocrats to the reformers’ great triumphs under Franklin Roosevelt and Harry Truman, Frank reminds us how much we owe to the populist ethos. Frank also shows that elitist groups have reliably detested populism, lashing out at working-class concerns. The anti-populist vituperations by the Washington centrists of today are only the latest expression.

Frank pummels the elites, revisits the movement’s provocative politics, and declares true populism to be the language of promise and optimism. The People, No is a ringing affirmation of a movement that, Frank shows us, is not the problem of our times, but the solution for what ails us.

Thomas Frank is the author of Listen, Liberal, Pity the Billionaire, The Wrecking Crew, and What's the Matter with Kansas? A former columnist for The Wall Street Journal and Harper's, Frank is the founding editor of The Baffler and writes regularly for The Guardian. He lives outside Washington, D.C.

"Brilliantly written, eye-opening . . . Frank is the ideal public intellectual to grapple with the duality of populism. . . . Readers come away knowing that at its heart, populism means just one thing: This land was made for you and me." —The Washington Post

"Rousing . . . central to the challenge of our times . . . A call to arms against the plutocratic elites of both America’s main parties . . . Frank’s real strength lies in his energetic optimism." —Financial Times

"Tom Frank does what few writers today are capable of doing—he criticizes his own side." —Wall Street Journal

"Deserves your attention . . . The People, No describes meticulously how over the last 120 years, reigning elites—whether conservative, liberal, or progressive—have regularly attacked populists with the same falsehoods . . . Welcome." —Forbes

"A terrific book . . . damning . . . eloquently-argued . . . The People, No documents the furious elite propaganda response to bottom-up political movements that has recurred in uncannily similar fashion at key moments across nearly a century and a half of American history, and is firing with particular venom today." —Matt Taibbi

"Brilliant . . . grand . . . an urgent plea to liberals and radicals alike to embrace a left populism and universalism—or keep on losing." —Jacobin

"An illuminating book, the best one I've read about the sound and fury of America's 2020 Election campaign." —Lewis H. Lapham

"A real contribution . . . Frank looks forward to the day when the 'liberal' elite and right-leaning populists exhaust themselves—and the Democratic Party reclaims its identity as the voice of workers." —City Journal

"Smart . . . Thomas Frank is one of the few great American political writers, and his new book The People, No is one of his best, if not his most urgent and pressing. . . . We need more Thomas Franks." —Splice Today

"Provocative . . . powerful . . . Frank has delivered a defiant challenge to the antipopulist liberals more infatuated with the advice of experts and their own moral virtues than mobilizing ordinary Americans on the basis of progressive values."
—The Progressive

"Populism is not just an old American way of doing politics, the author argues, but fundamentally a progressive one as well. . . convincing . . . an eminently readable contribution to political discourse." —Kirkus Reviews

"With his usual verve, Frank skewers the elite voices of condescension that vilify the egalitarian and democratic strivings of working people. In so doing, he offers a passionate defense of populism, which he reveals as a deep and wide political tradition that remains as essential as ever for the hopes of a more just and equitable society.” —Charles Postel, author of Equality: An American Dilemma, 1866–1896