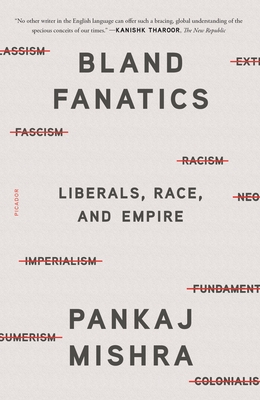 A wide-ranging, controversial collection of critical essays on the political mania plaguing the West by one of the most important public intellectuals of our time.

In America and in England, faltering economies at home and failed wars abroad have generated a political and intellectual hysteria. It is a derangement manifested in a number of ways: nostalgia for imperialism, xenophobic paranoia, and denunciations of an allegedly intolerant left. These symptoms can be found even among the most informed of Anglo-America.

In Bland Fanatics, Pankaj Mishra examines the politics and culture of this hysteria, challenging the dominant establishment discourses of our times. In essays that grapple with the meaning and content of Anglo-American liberalism and its relations with colonialism, the global South, Islam, and “humanitarian” war, Mishra confronts writers such as Jordan Peterson, Niall Ferguson, and Salman Rushdie. He describes the doubling down of an intelligentsia against a background of weakening Anglo-American hegemony, and he explores the commitments of Ta-Nehisi Coates and the ideological determinations of The Economist. These essays provide a vantage point from which to understand the current crisis and its deep origins.

Pankaj Mishra is the author of From the Ruins of Empire, Age of Anger, and several other books. He is a columnist at Bloomberg View and writes regularly for The Guardian, the London Review of Books, and The New Yorker. A fellow of the Royal Society of Literature, he lives in London.

“The greatest contribution of Mishra’s work is its indefatigable insistence that places long considered marginal belong in the foreground of modern political history . . . No other writer in the English language can offer such a bracing, global understanding of the specious conceits of our times.”
—Kanishk Tharoor, The New Republic

“Well before Brexit, Trump, or COVID-19, [Mishra] sounded the siren. Anglophone leaders, inhabiting a hall of mirrors, were becoming dangerously detached from the actual world. The problem was not partisan but general, and it was reaching a crisis. Mishra has been beating this drum for more than a decade . . . Reading Bland Fanatics now, while trapped in an apartment surrounded by strategic reserves of canned food and toilet paper, it’s hard not to think: You know, he might have had a point.”
—Daniel Immerwahr, Foreign Policy

“Mishra has reached the point where his summary judgments can be treated as authoritative by a Western audience. Yet the basis of those judgments was established long before his name began to carry weight. Over the course of an exceptional career, he has continually picked at the knot joining ambitious fancies in the global center to the peripheral, bloody business that enables them—the dialectic of great expectations.”
—Frank Guan, Bookforum

“A useful corrective to the Grand Narrative that still maintains a firm grip on the imagination of many in the West . . . As a goad to liberal self-criticism, Mishra is well worth reading.”
—Damon Linker, New York Times

“Mishra excels at calling out intellectual vapidities, what he calls “pseudo-scholarship” . . . This is a writer with a clearer sense of what he is up against, who veers into the personal only to draw a larger political point. In a post-truth world, you read Mishra to clear the air, to make sense of our bewildering moment.”
—Abhrajyoti Chakraborty, The Guardian

“A dazzling display of what close analysis and precise polemic can achieve . . . this collection does a whole lot more than simply kick against the pricks. It’s an extraordinarily powerful argument, by a writer of powerful and perhaps even remorseless conviction, for the case that we need first to rethink our past in order to reshape our future. And never more so than in the times of present stress.”
—Mark Rappolt, Art Review

“Bland Fanatics points to the tragic irony in how the very same cheerleaders of Western civilisation may have in fact engineered their own decline . . . Mishra has managed to break beyond the burden of representation and has spent the past few years examining the politicians, pundits, and ‘thought leaders’ who champion a romantic vision of Western civilization.”
—Rebecca Liu, The White Review

“This erudite and dryly witty collection will help readers to make sense of the current age of discontent.”
—Publishers Weekly

“Mishra offers a sharp rebuke of Western neoliberalism. In this wide-ranging and eviscerating collection of essays, Mishra pillories the imperialistic dogmas that are still alive and well and having a ruinous impact on domestic and foreign policy. Tactics once exclusively used on colonial populations have been brought home and the West’s relationship with the global south is still dictated by imperialist interventionism and massive resource transfer."
—Powell's Books Best Nonfiction of 2020