Dominion: The History of England from the Battle of Waterloo to Victoria's Diamond Jubilee (Paperback) 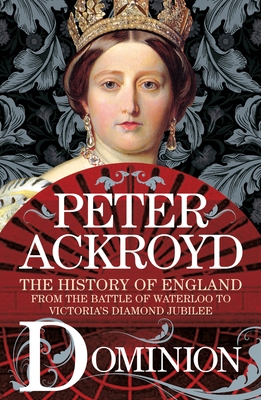 Dominion: The History of England from the Battle of Waterloo to Victoria's Diamond Jubilee (Paperback)

This is book number 5 in the The History of England series.

"Ackroyd, as always, is well worth the read." —Kirkus, starred review

Dominion, the fifth volume of Peter Ackroyd’s masterful History of England, begins in 1815 as national glory following the Battle of Waterloo gives way to a post-war depression and ends with the death of Queen Victoria in January 1901.

Spanning the end of the Regency, Ackroyd takes readers from the accession of the profligate George IV whose government was steered by Lord Liverpool, whose face was set against reform, to the ‘Sailor King’ William IV whose reign saw the modernization of the political system and the abolition of slavery.

But it was the accession of Queen Victoria, at only eighteen years old, that sparked an era of enormous innovation. Technological progress—from steam railways to the first telegram—swept the nation and the finest inventions were showcased at the first Great Exhibition in 1851. The emergence of the middle-classes changed the shape of society and scientific advances changed the old pieties of the Church of England, and spread secular ideas among the population. Though intense industrialization brought booming times for the factory owners, the working classes were still subjected to poor housing, long work hours, and dire poverty. Yet by the end of Victoria’s reign, the British Empire dominated much of the globe, and Britannia really did seem to rule the waves.

"Ackroyd's deep and broad canvas is rich in informative details and will appeal to all readers interested in British history while especially pleasing those fascinated by this era." —Booklist

“Ackroyd continues his fast-paced overview of the tumultuous English monarchy with the fourth volume in the series, an account of the "long 18th century" (1688–1815) that covers the evolution of literature, trade, technology, and politics…Ackroyd offers suitable background on the momentous events and key figures that helped create modern Britain.” —Publishers Weekly

“[T]he author eschews the detached third person preferred by stuffy professionals, favouring instead a more intimate 'you' that brings the reader into the dark alleys of industrial towns.” —The Times (UK)

"For Ackroyd, the past isn't merely past; it's alive." —The Boston Globe

"Ackroyd is a medium through which the obscured voices of the past are channeled." —Newsday