Councilor: A Novel in the Grand Illusion (Mass Market) 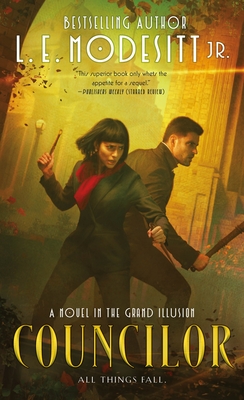 Councilor: A Novel in the Grand Illusion (Mass Market)

This is book number 2 in the The Grand Illusion series.

L. E. Modesitt, Jr., bestselling author of Saga of Recluce and the Imager Portfolio, continues his gaslamp, political fantasy series with Councilor the thrilling sequel to Isolate. Welcome to the Grand Illusion.

Against this rising tide of social unrest, Steffan Dekkard, newly appointed to the Council of Sixty-Six, is the first Councilor who is an Isolate, a man invulnerable to the emotional manipulations and emotional surveillance of empaths.

This makes him dangerous.

As unknown entities seek to assassinate him, Dekkard struggles to master political intrigue and infighting, while introducing radical reforms that threaten entrenched political and corporate interests.