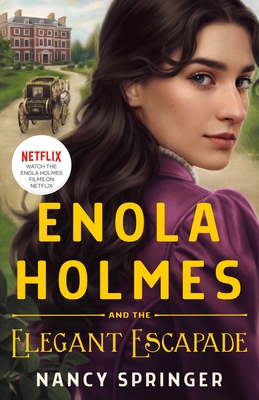 Enola Holmes, Sherlock's much younger, and feistier, sister, returns in an adventure of a confused young Baronet's daughter who is on the run from her father's devious schemes in Nancy Springer's Enola Holmes and the Elegant Escapade.

Enola Holmes, the much younger sister of Sherlock, is now living independently in London and working as a scientific perditorian (a finder of persons and things). But that is not the normal lot of young women in Victorian England. They are under the near absolute control of their nearest male relative until adulthood. Such is the case of Enola's friend, Lady Cecily Alastair. Twice before Enola has rescued Lady Cecily from unpleasant designs of her caddish father, Sir Eustace Alastair, Baronet. And when Enola is brusquely turned away at the door of the Alastair home it soon becomes apparent that Lady Cecily once again needs her help.

Affecting a bold escape, Enola takes Lady Cecily to her secret office only to be quickly found by the person hired by Lady Cecily's mother to find the missing girl - Sherlock Holmes himself. But the girl has already disappeared again, now loose on her own in the unforgiving city of London.

Even worse, Lady Cecily has a secret that few know. She has dual personalities - one, which is left-handed, is independent and competent; the other, which is right-handed, is meek and mild. Now Enola must find Lady Cecily again - before one of her personalities gets her into more trouble than she can handle and before Sherlock can find her and return her to her father. Once again, for Enola, the game is afoot.

NANCY SPRINGER is the author of the nationally bestselling Enola Holmes novels, including The Case of the Missing Marquess, which was made into the hit Netflix movie, Enola Holmes. She is the author of more than 50 other books for children and adults. She has won many awards, including two Edgar Awards, and has been published in more than thirty countries. She lives in Florida.