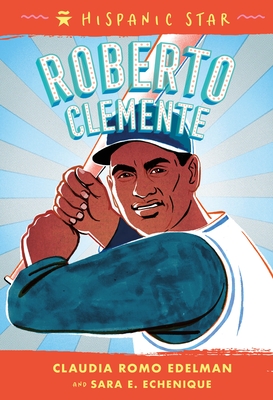 This is book number 1 in the Hispanic Star series.

Read about Puerto Rican Baseball Hall of Famer Roberto Clemente in Hispanic Star: Roberto Clemente, and learn the most groundbreaking, iconic Hispanic and Latinx heroes that have shaped our culture and the world in this gripping biography series for young readers, perfect for fans of the Who Was series.

Meet Puerto Rican Baseball Hall of Famer Roberto Clemente, once just a kid from Carolina, Puerto Rico, who loved to play baseball on the streets of his hometown with friends and family. As a right fielder, Roberto played eighteen seasons with Major League Baseball, but his life was tragically cut short when a plane he chartered to bring earthquake relief supplies to Nicaragua crashed. The first Latin American player to be inducted into the National Baseball Hall of Fame, Clemente paved the way for generations of Latinx athletes.

Hispanic Star proudly celebrates Hispanic and Latinx heroes who have made remarkable contributions to American culture and have been undeniable forces in shaping its future.

Claudia Romo Edelman is the Founder of the We Are All Human Foundation. Claudia has worked for 25 years with internationally recognized institutions including the United Nations, UNICEF, the Global Fund and the World Economic Forum. She has a track record in launching global campaigns, and she’s a master of agenda setting. She has been in the driver’s seat of some of the most successful global campaigns in the last decade including: the launch of the SDG’s, Product (RED), the creation of the SDG Lions and rebranding of the UN Refugee Agency.

Sara E. Echenique is a Puerto Rican lawyer and children’s author living in Florida with her two young children, husband Ondrej, and their Puerto Rican rescue dog, Luna. She grew up with her siblings on the island and is proud to be passing on her Puerto Rican heritage to her children. Her books include Hispanic Star: Roberto Clemente (with Claudia Romo Edeman) and the picture book Our Roof is Blue.

"A sense of warmth and pride radiates through this telling, and even non-sports fans will be drawn in. . . Well-crafted and accessible." - School Library Journal, starred review

"Highlighted issues of racism [add] context to his times and luster to his achievements." - Kirkus