Ander and Santi Were Here: A Novel (Hardcover) 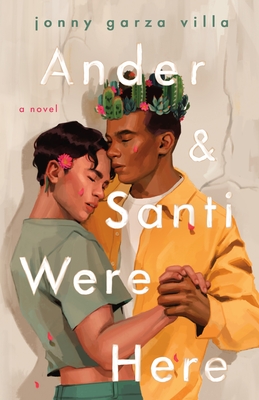 Ander and Santi Were Here: A Novel (Hardcover)

Aristotle and Dante Discover the Secrets of the Universe meets The Sun is Also a Star in this YA contemporary love story from Jonny Garza Villa, Ander and Santi Were Here, about a nonbinary Mexican American teen falling for the shy new waiter at their family’s taqueria.

The Santos Vista neighborhood of San Antonio, Texas, is all Ander Lopez has ever known. The smell of pan dulce. The mixture of Spanish and English filling the streets. And, especially their job at their family's taquería. It's the place that has inspired Ander as a muralist, and, as they get ready to leave for art school, it's all of these things that give them hesitancy. That give them the thought, are they ready to leave it all behind?

To keep Ander from becoming complacent during their gap year, their family "fires" them so they can transition from restaurant life to focusing on their murals and prepare for college. That is, until they meet Santiago Garcia, the hot new waiter. Falling for each other becomes as natural as breathing. Through Santi's eyes, Ander starts to understand who they are and want to be as an artist, and Ander becomes Santi's first steps toward making Santos Vista and the United States feel like home.

Until ICE agents come for Santi, and Ander realizes how fragile that sense of home is. How love can only hold on so long when the whole world is against them. And when, eventually, the world starts to win.

JONNY GARZA VILLA (they/them) is an author of contemporary young adult literature with characters and settings inspired by their own Tejane, Chicane, and queer identities. Whatever the storyline, Jonny ultimately hopes Latines, and, more specifically, queer Mexican American young people will feel seen in their writing. Their debut YA novel Fifteen Hundred Miles from the Sun was a Pura Belpré Honor Book and a Kirkus Best YA Fiction of 2021 selection. When not writing, Jonny enjoys reading, playing Dungeons and Dragons, visiting taquerías, listening to Selena, and caring for their many cacti children. They live in San Antonio.

"This book is a living, breathing love letter, and I felt every beat of it. Jonny Garza Villa’s fiercely vulnerable writing leaves a permanent mark." – Becky Albertalli, award-winning author of Simon vs the Homo Sapiens Agenda

"With a swoony romance full of sex positivity, humor, and PAIN, Jonny Garza Villa will destroy your heart and piece it back together and you will thank them for it." – Sonora Reyes, author of The Lesbiana's Guide To Catholic School

“A beautiful ode to holding on—to our precious family histories, to home wherever we choose to make it, and most importantly, to love.” – Laekan Zea Kemp, author of Pura Belpré Honor book Somewhere Between Bitter and Sweet

"ANDER & SANTI WERE HERE is a uniquely soft heartbeat—devastating in its truth and profound in its beauty. JGV offers their readers another brilliant story, one that arrives ready to expose the truth of living and loving undocumented in America. At its core, ANDER AND SANTI is both a love story and a loud message made up of undeniably romantic moments, great banter, clutch-your-pillow flirting, and raw exposure to obstacles the Latine community meets head-on every day. Ander, Santi and Jonny Garza Villa have given readers a kind of poetry within this story that is meant to move you." – Cam Montgomery, author of By Any Means Necessary

"A romance that knows no borders, ANDER & SANTI WERE HERE is a rich, relatable, Latine story not soon to be forgotten." – e.E. Charlton-Trujillo, ALA winning author of the Fat Angie series