Contrarian: A Novel in the Grand Illusion (Hardcover) 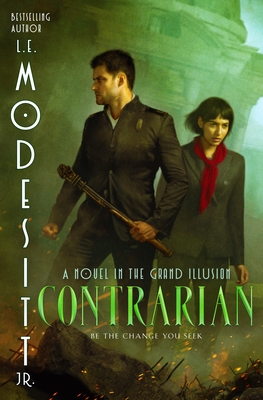 Contrarian: A Novel in the Grand Illusion (Hardcover)

This is book number 3 in the The Grand Illusion series.

L. E. Modesitt, Jr., bestselling author of Saga of Recluce and the Imager Portfolio, continues his gaslamp political fantasy series which began with Isolate and Councilor. Welcome to the Grand Illusion

In Contrarian, protests against unemployment and poor harvests have become armed riots as the people sink deeper into poverty. They look to a government struggling to emerge from corruption and conspiracy.

Recently elected to the Council of Sixty-Six, Steffan Dekkard is the first Councilor who is an Isolate, a man invulnerable to the emotional manipulations and emotional surveillance of empaths—but not the recent bombing of the Council Office Building by insurrectionists.

His patron, the Premier of the Council, has been assassinated, leaving Dekkard with little first-hand political experience and few political allies.

Not only must Dekkard handle political infighting, and continued assassination attempts, but it appears that someone high up in the government and corporations has supplied arms and explosives to insurrectionists.

Insurrectionists who have succeeded in taking over a naval cruiser that no one can seem to find.