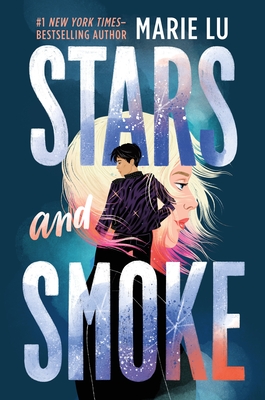 This smoldering enemies-to-lovers novel from #1 New York Times bestselling author Marie Lu puts a superstar global phenomenon and a hotshot young spy on a collision course with danger – and Cupid’s arrow – in an electric new series perfect for fans of Ali Hazelwood and Nicola Yoon.

Meet Winter Young – International pop sensation, with a voice like velvet and looks that could kill. His star power has smashed records, selling out stadiums from LA to London. His rabid fans would move heaven and earth for even a glimpse of him – just imagine what they’d do to become his latest fling.

Meet Sydney Cossette – Part of an elite covert ops group, Sydney joined their ranks as their youngest spy with plans to become the best agent they’ve ever had. An ice queen with moves as dangerous as her comebacks, Sydney picks up languages just as quickly as she breaks hearts. She's fiery, no-nonsense, and has zero time for romance – especially with a shameless flirt more used to serving sass than taking orders.

When a major crime boss gifts his daughter a private concert with Winter for her birthday, Sydney and Winter's lives suddenly collide. Tasked with infiltrating the crime organization’s inner circle, Sydney is assigned as Winter's bodyguard with Winter tapped to join her on the mission of a lifetime as a new spy recruit. Sydney may be the only person alive impervious to Winter's charms, but as their mission brings them closer, she’s forced to admit that there's more to Winter Young than just a handsome face . . .

Romance and danger abound in this “brilliant, breathtaking ride that will leave you clamoring for the sequel.” — Tahereh Mafi, #1 internationally bestselling author of Shatter Me.

Marie Lu is the #1 New York Times–bestselling author of the Legend series, The Young Elites trilogy, the Warcross series. the Skyhunter series, Batman: Nightwalker, and The Kingdom of Back. She graduated from the University of Southern California and jumped into the video game industry, where she worked as an artist. A full-time writer, she spends her spare hours reading, drawing, playing games, and getting stuck in traffic. She lives in the traffic-jam capital, Los Angeles, with her illustrator/author husband, Primo Gallanosa, and their son.

*One of Seventeen magazine's most anticipated YAs of 2023!*

“At once thrilling and poignant . . . a brilliant, breathtaking ride that will leave you clamoring for the sequel.” — Tahereh Mafi, #1 internationally bestselling author of Shatter Me

“A nail-biting thriller and a breathless romance, a keen character study and a wildly entertaining international caper . . with characters so charming and wounded and well-crafted that you’ll want them to walk off the page.” — Sabaa Tahir, #1 New York Times–bestselling author of the Ember in the Ashes series and National Book Award Winner All My Rage

“A classic covert caper from one of YA’s brightest stars. If you ever wondered what would happen if a pop star joined Kingsman, this is the book for you.” — Ally Carter, New York Times–bestselling author of Not If I Save You First

"Marie Lu has done it again with an unputdownable, gorgeously written spy caper that will have you rooting for the spies to just kiss already." — Maurene Goo, acclaimed author of Somewhere Only We Know and Throwback

"A propulsive and thrilling joyride from start to finish . . . The dynamic romance will have your heart racing just as much as the mission itself. I haven't smiled through a mystery like this since Knives Out." — Adam Silvera, #1 New York Times–bestselling author of They Both Die at the End

"To my mind, Marie Lu can do no wrong and this may be my favorite novel of hers. Stars and Smoke is thrilling and wonderfully romantic and so much more than that. There is wisdom and real emotional depth pulsing through these pages that’s as gripping as the plot itself." — Nicola Yoon, #1 New York Times–bestselling author of The Sun Is Also a Star