The Art of War: A New Translation by Michael Nylan (Hardcover) 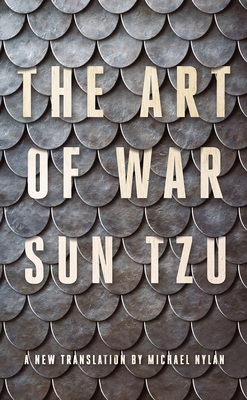 The Art of War: A New Translation by Michael Nylan (Hardcover)

For the first time in any modern language, a female scholar and translator reimagines The Art of War.

Sun Tzu’s ancient book of strategy and psychology has as much to tell us today as when it was first written 2,500 years ago. In a world forever at odds, his rules for anticipating the motivations and strategies of our competitors never cease to inspire leaders of all kinds.

Michael Nylan, in her provocative introduction, sees new and unexpected lessons to be learned from The Art of War—in business ventures, relationships, games of skill, academic careers, and medical practices. Strategy, like conflict, is woven into society’s very roots.

Nylan’s crisp translation “offers a masterly new evaluation of this classic work, which balances the overtly military content with a profound and thought-provoking analysis” (Olivia Milburn). Readers newly engaging with ancient Chinese culture will be inspired by Nylan’s authoritative voice. Informed by years of scholarly study, Nylan is uniquely placed to introduce readers to Sun Tzu’s classic work through her detailed annotations on culture and the intricacies of translating ancient Chinese into modern English. She proves that Sun Tzu is more relevant than ever, helping us navigate the conflicts we know and those we have yet to endure.

Michael Nylan is a professor of history at the University of California, Berkeley. Her work includes?The Art of War?and China’s Early Empires with Michael Loewe,?Yang?Xiong?and the Pleasures of Reading and Classical Learning in China, The Five “Confucian” Classics,?Lives of Confucius with Thomas A. Wilson, and several essays on feminism and Confucianism.
Each sentence is a struck match…[Nylan's] translation is insightful and alert.
— Dwight Garner - New York Times

I consumed Professor Nylan’s edition of The Art of War in one sitting! Sun Tzu has been so often translated that we run the risk of forgetting just how gripping and remarkable his little book is. The most impressive thing about the Nylan translation is its total lack of complacency—it’s the sharpest and most uncompromising English-language rendition of this book I've ever read.

Michael Nylan’s translation is marvelous. The pithiness of certain parts of the text, its aphoristic quality, presents an exceptionally difficult challenge. Because Nylan has a deep understanding of the social and cultural milieu that produced Sun Tzu’s treatise, she has created an English-language version that is accessible while retaining the literary beauty of the original. Her introduction and supporting materials are very helpful to the reader, and I would expect that this version will become the standard one in the field.
— Dennis Washburn, translator of The Tale of Genji

Michael Nylan’s masterful translation of The Art of War brings historical depth to our understanding of the classic and also illuminates its broad significance for our world today.