The Monster's Bones (Young Readers Edition): The Discovery of T. Rex and How It Shook Our World (Hardcover) 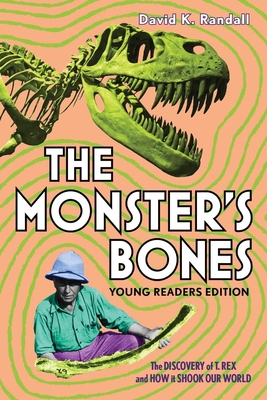 The Monster's Bones (Young Readers Edition): The Discovery of T. Rex and How It Shook Our World (Hardcover)

The thrilling tale of America’s early paleontologists and the discovery of the first T. Rex fossil, now adapted for young readers.

When Brown unearths the first Tyrannosaurus Rex fossils, Osborn sees a path to save his museum from irrelevancy. As the public turns out in droves to cower before this bone-chilling giant of the past and wonder at the mysteries of its disappearance, Brown and Osborn turn dinosaurs into a beloved part of culture.

In this vivid and engaging young readers adaptation, New York Times best-selling author David K. Randall journeys from prehistory to present day, from remote Patagonia to the unforgiving Badlands of the American West to the penthouses of Manhattan. The Monster’s Bones reveals how a monster of a bygone era ignited a new understanding of our planet and our place within it.

David K. Randall is the New York Times best-selling author of four books, including Dreamland and Black Death at the Golden Gate. His writing has appeared in the New York Times, Wall Street Journal, and elsewhere. A senior reporter at Reuters, he lives in Montclair, New Jersey.