The Twelve Lives of Alfred Hitchcock: An Anatomy of the Master of Suspense (Paperback) 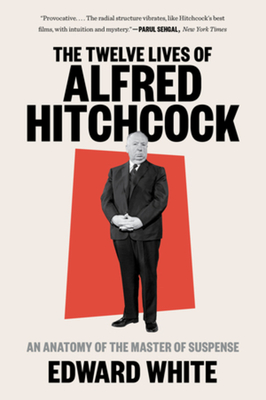 The Twelve Lives of Alfred Hitchcock: An Anatomy of the Master of Suspense (Paperback)

Winner of the 2022 Edgar Award for Best Biography

An Economist Best Book of 2021

A fresh, innovative biography of the twentieth century’s most iconic filmmaker.

In The Twelve Lives of Alfred Hitchcock, Edward White explores the Hitchcock phenomenon—what defines it, how it was invented, what it reveals about the man at its core, and how its legacy continues to shape our cultural world.

The book’s twelve chapters illuminate different aspects of Hitchcock’s life and work: “The Boy Who Couldn’t Grow Up”; “The Murderer”; “The Auteur”; “The Womanizer”; “The Fat Man”; “The Dandy”; “The Family Man”; “The Voyeur”; “The Entertainer”; “The Pioneer”; “The Londoner”; “The Man of God.” Each of these angles reveals something fundamental about the man he was and the mythological creature he has become, presenting not just the life Hitchcock lived but also the various versions of himself that he projected, and those projected on his behalf.

From Hitchcock’s early work in England to his most celebrated films, White astutely analyzes Hitchcock’s oeuvre and provides new interpretations. He also delves into Hitchcock’s ideas about gender; his complicated relationships with “his women”—not only Grace Kelly and Tippi Hedren but also his female audiences—as well as leading men such as Cary Grant, and writes movingly of Hitchcock’s devotion to his wife and lifelong companion, Alma, who made vital contributions to numerous classic Hitchcock films, and burnished his mythology. And White is trenchant in his assessment of the Hitchcock persona, so carefully created that Hitchcock became not only a figurehead for his own industry but nothing less than a cultural icon.

Ultimately, White’s portrayal illuminates a vital truth: Hitchcock was more than a Hollywood titan; he was the definitive modern artist, and his significance reaches far beyond the confines of cinema.

Edward White is the author of The Tastemaker: Carl Van Vechten and the Birth of Modern America and has written for publications including the Paris Review. He lives in England.
A provocative new way of thinking about biography....The radial structure vibrates, like Hitchcock’s best films, with intuition and mystery.
— Parul Sehgal - New York Times

The great strength of The Twelve Lives is that a reader comes away from it with a vivid sense of how Hitchcock ignited screen masterpieces with the fires of his inner discord and contradictions.

Thoughtful and nuanced....Grasps Hitchcock’s enduring hold on our aspirations and our fears.
— Glenn Frankel - Washington Post

Perceptive and gracefully written, The Twelve Lives of Alfred Hitchcock is a bracing study of the master of suspense.... It is a rare book that could pleasurably be twice as long.

Rather than forcing Hitchcock’s often contradictory guises into a coherent whole, this deft account takes them as a starting point. The result is a nuanced and frequently unfamiliar portrait. Essays on the director’s sartorial and culinary preoccupations and his penchant for publicity—chapter headings include ‘The Fat Man’ and ‘The Dandy’—yield new perspectives on a multifaceted career.
— The New Yorker

By approaching the life and career of Alfred Hitchcock from a dozen distinct and revealing vantage points, Edward White presents a portrait that is highly nuanced, brimming with critical insights, and, like his subject, thoroughly entertaining.
— Noah Isenberg, author of We’ll Always Have Casablanca: The Life, Legend, and Afterlife of Hollywood's Most Beloved Movie

Edward White’s The Twelve Lives of Alfred Hitchcock is a pinata of literary pleasures. Learned and graceful, thoughtful and provocative, White cracks the Hitchcock code with deft analysis and fine writing. It’s a high-stepping performance full of humor and depth. Walking a tightrope between criticism and biography, White places both the man and his myth in the cultural landscape of his times. In the process, he returns us to the films with a much more informed eye. A book to keep and to return to.