...and Then You Die Of Dysentery: Lessons in Adulting from the Oregon Trail (Hardcover) 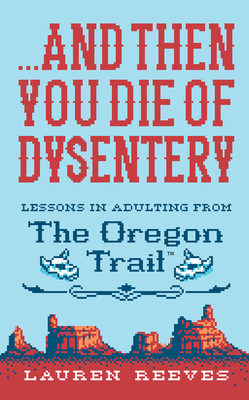 ...and Then You Die Of Dysentery: Lessons in Adulting from the Oregon Trail (Hardcover)


Not On Our Shelves—Ships in 1-5 Days
A quirky, nostalgic send-up to the Oregon Trail computer game, featuring snarky and hard-earned life lessons from the trail.

Pack your wagons, find your ride-or-(literally) die friends, and roll up to Matt’s General Store with a sack of cash—it’s time to hit the Oregon Trail, twenty-first-century style! …And Then You Die of Dysentery is the perfect send-up to the sometimes frustrating, always entertaining, and universally beloved Oregon Trail computer game. Featuring a four-color design in the game’s iconic 8-bit format, alongside pop culture references galore, the book offers 50 humorous, snarky lessons gleaned from the game’s most iconic moments, including gems such as:
—Suffering from exhaustion is a real thing. (It’s not just PR code for why a celebrity went to rehab.)
—If you hunt too frequently in one area, game will become scarce. (The first signs of gentrification!)
—Invite your sweetie to cuddle with you while looking up at the stars. (The night sky was the original Netflix & Chill. Step 1: Loosen up Orion’s belt...)

With its laugh-out-loud commentary and its absurdist nostalgia, ...And Then You Die of Dysentery is the ultimate trip down memory lane … all the way to the Willamette Valley.
Lauren Reeves is a comedy writer, actress, and TV host. She was born and raised on a goldmine in Fairbanks, Alaska, leaving at the age of 20 for New York City. Lauren has appeared regularly on David Letterman and Jimmy Fallon, and has worked for shows including Comedy Central's @Midnight, TBS's The Detour, The Clio Awards and The Village Voice Pride Awards. She currently lives in Los Angeles with her golden retriever, Perci. He wrote this book, not her.