Death Coming Up The Hill (Paperback) 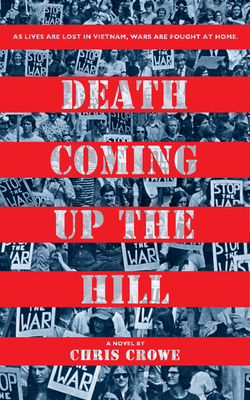 Death Coming Up The Hill (Paperback)

A strikingly innovative and powerful story, Death Coming Up the Hill portrays the momentous events of the year 1968 as seen through the eyes of a perceptive seventeen-year-old boy.

"Take a look at this gripping, fast-moving quick pick." —The Bulletin

It’s 1968, and war is not foreign to seventeen-year-old Ashe. His racist father married his peace-activist mother when she became pregnant with him, and ever since, the couple, like the situation in Vietnam, has been engaged in a “senseless war that could have been prevented.” When his high school teacher dares to teach the political realities of the war, Ashe grows to better understand the situation in Vietnam, his family, and the world around him. But when a new crisis hits his parents’ marriage, Ashe finds himself trapped, with no options before him but to enter the fray.

CHRIS CROWE, a professor of English at Brigham Young University, has published award-winning fiction and nonfiction for teenagers, poetry, essays, books, and many articles for academic and popular magazines. He is a popular speaker and writer in librarian and teacher circles. He lives with his wife in Provo, Utah. Learn more about Chris at chriscrowe.com and follow him on Twitter @crowechris.

"Through simple yet powerful words, Crowe expertly reveals life in 1968...Teens wil be drawn to what it is like to be living an everyday existence during wartime." —VOYA   "The unusual narrative style makes this exploration of Vietnam-era politics at home and abroad readily accessible to struggling readers, while fans of poetry may appreciate the eloquence in its brevity." —Booklist   "Readers will settle quickly into the haiku, most likely either ignoring it or pausing to take notice of those moments in which the rhythm cannily emulates speech patterns. YAs convinced they don’t like historical fiction should take a look at this gripping, fast-moving quick pick." —Bulletin —