The Tower of Life: How Yaffa Eliach Rebuilt Her Town in Stories and Photographs (Hardcover) 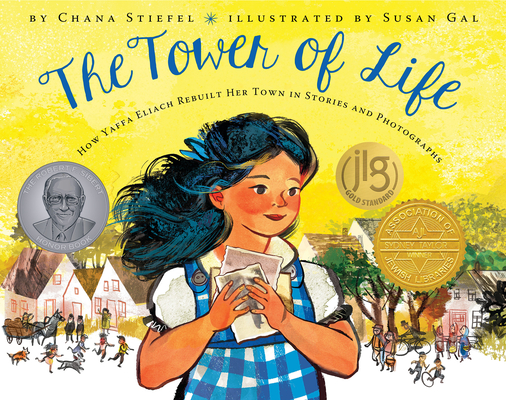 The Tower of Life: How Yaffa Eliach Rebuilt Her Town in Stories and Photographs (Hardcover)


On Our Shelves Now at:
A moving biography of the woman who created The Tower of Life, a powerful exhibit at the US Holocaust Memorial Museum in Washington, DC.

★ “…There are many picture books about the Holocaust, but this one stands out with Gal’s beautiful watercolor pictures and the true account of one woman’s goal that her community never be forgotten. A beautiful tribute….Highly recommended.” — School Library Journal, starred review

★ “A stunning tale . . . . bursting with detail and life. . . . A magnificent and moving tribute to a loving community and an extraordinary woman.” — Booklist, starred review

“ …A loving testament to light and hope and the vision of a remarkable woman.” — Kirkus Reviews

“…the book’s mes­sage is con­sis­tent­ly opti­mistic... Stiefel paints a truth­ful por­trait appro­pri­ate for those just begin­ning to learn about the Holocaust….Gal’s artwork…is dramatic and accessible…a book that ensures [Eliach and her town] will not be forgotten.” — Jewish Book Council

There once was a girl named Yaffa. She loved her family, her home, and her beautiful Polish town that brimmed with light and laughter. She also loved helping her Grandma Alte in her photography studio. There, shopkeepers, brides, babies, and bar mitzvah boys posed while Grandma Alte captured their most joyous moments on film. And before the Jewish New Year, they sent their precious photographs to relatives overseas with wishes for good health and happiness.

But one dark day, Nazi soldiers invaded the town. Nearly 3,500 Jewish souls — including family, friends, and neighbors of Yaffa — were erased.

This is the stunning true story of how Yaffa made it her life’s mission to recover thousands of her town’s photographs from around the world. Using these photos, she built her amazing TOWER OF LIFE, a permanent exhibit in the US Holocaust Memorial Museum, to restore the soaring spirit of Eishyshok.

Chana Stiefel is the award-winning author of more than 30 humorous and heartfelt books for children. Her nonfiction books include THE TOWER OF LIFE, the true story of Holocaust survivor and historian Yaffa Eliach, who created the Tower of Faces at the US Holocaust Memorial Museum (a Junior Libary Guild Gold Medal Selection, Scholastic); LET LIBERTY RISE: How America’s Schoolchildren Helped Save the Statue of Liberty (a Bank Street Best Book of the Year, Scholastic, 2021); and ANIMAL ZOMBIES & OTHER REAL-LIFE MONSTERS (a Top 10 YALSA Quick Pick, NatGeoKids). Chana’s funny fictional picture books include MENDEL’S HANUKKAH MESS UP (Kalaniot), MY NAME IS WAKAWAKALOCH (HMH), and DADDY DEPOT (Feiwel & Friends). She loves to visit schools and libraries to share her passion for reading and writing with children.

After completing her BFA at Art Center College of Design, Susan Gal began her illustration career as a poster and calendar artist. The call of animation beckoned her to Florida where she became an "actor with a pencil" for Disney Animation. But the lure of the silver screen was not to last. Returning to her native California, Susan continues to create fun and whimsical illustrations while attempting to live a caffeine and nuclear-free life in Berkeley. Her book Welcoming Elijah, by Lesléa Newman, won the Sydney Taylor Book Award.

Praise for The Tower of Life:

★ “…(When) President Jimmy Carter reached out to Yaffa (Eliach) and asked her to help with a memorial being built for the victims of the Holocaust… she decided to build (it) not on bricks, but on photographs that were saved from Eishyshok. Traveling around the world, she found 6,000 photographs to display on what would later be called the Tower of Life. Not a memorial of the dead, but of the life that came from her beloved hometown. There are many picture books about the Holocaust, but this one stands out with Gal’s beautiful watercolor pictures and the true account of one woman’s goal that her community never be forgotten. A beautiful tribute…Highly recommended.” — School Library Journal, starred review

★ “It’s a stunning tale, spanning decades and continents, and a tender introduction to a terrible time in human history. The watercolor illustrations, bursting with detail and life, utilize warm, bright colors in times of peace and deep reds and blacks in wartime. The drawings cleverly incorporate rectangular photograph frames into the village scenes, beautifully demonstrating the power of snapshots to memorialize beloved people and places. A magnificent and moving tribute to a loving community and an extraordinary woman.” — Booklist, starred review

★ “The creators center the experiences of historian Yaffa Eliach (1935–2016) in this moving look at the creation of the United States Holocaust Memorial Museum’s Tower of Faces. . . . saturated ink, watercolor, and digital collage illustrations show the deeply rooted community, which ‘pulsed with love, laughter, and light’. . . .and a concluding spread pays powerful tribute to the resulting memorial.” — Publisher’s Weekly, starred review

"A Jewish Polish woman resurrects her hometown through photographs. Yaffa Eliach (1935-2016) grew up in the shtetl town of Eishyshok, Poland. She and her family lived there contentedly until the Germans occupied the town in 1941 and murdered most of its Jewish population. Yaffa and her family escaped and hid until the war ended. Before, one of Yaffa’s favorite childhood activities was assisting her grandmother, the town photographer, who documented weddings, bar mitzvahs, and other celebrations; these photos were mailed to relatives around the world. Years later, Yaffa, now a married history professor and Holocaust scholar residing in America, was tasked by President Jimmy Carter with creating an exhibit for Washington, D.C.’s new United States Holocaust Memorial Museum. Determined to celebrate life instead of destruction, Yaffa spent years tracking down thousands of photos of Eishyshok’s residents and descendants, traveling around America and the world. The result: the Tower of Life, depicted in a 90-degree book turn. One of the actual photos contained in the memorial—included herein—shows Yaffa herself as a child in Eishyshok in her father’s arms; another childhood photo of Yaffa is also included in the book. Though it tackles dark themes, this heartfelt story is ultimately uplifting. The illustrations, rendered in ink, watercolor, and digital collage, brim with warm, colorful details. A loving testament to light and hope and the vision of a remarkable woman." — Kirkus Reviews

Young Yaf­fa Eli­ach is an ordi­nary child blessed with a lov­ing fam­i­ly and close-knit com­mu­ni­ty. When the book opens, she lives in Eishyshok, a small town sit­u­at­ed in present-day Lithua­nia (for­mer­ly Poland). As in oth­er books about the Holo­caust for chil­dren, there is an ele­giac tone abrupt­ly inter­rupt­ed by the Nazi inva­sion. Scenes of sled­ding and skat­ing and trips to the crowd­ed out­door mar­ket quick­ly become a dis­tant mem­o­ry as the Ger­man army assaults the town, leav­ing behind destruc­tion and death.

Where anoth­er author might prin­ci­pal­ly focus on the family’s pre­war obser­vance of Jew­ish hol­i­days, Stiefel’s approach is more sub­tle. She fore­shad­ows Eliach’s future by describ­ing com­mu­nal trips to the ceme­tery, ​“where grand­par­ents told tales of their ances­tors buried beneath their feet.” These sto­ries are instru­men­tal in ​“keep­ing their faith and tra­di­tions alive,” and their cus­tom will reap­pear lat­er, when Eli­ach devotes her career to bring­ing her ances­tors back to life. Anoth­er dis­tinc­tive part of Eliach’s child­hood is her grandmother’s pho­tog­ra­phy stu­dio. Peo­ple seek out Grand­ma Alte’s bar mitz­vah por­traits and Jew­ish New Year cards, both the prod­ucts of an Amer­i­can cam­era. After the war, Eli­ach will under­take the ​“sacred mis­sion ​“of recov­er­ing and arrang­ing these pro­found pieces of evi­dence for her books and, lat­er, her exhibit.

Susan Gal’s art­work, mean­while, is both dra­mat­ic and acces­si­ble, an invi­ta­tion to look at Eliach’s life with com­pas­sion and awe. Chil­dren will relate to the young girl in a bright ging­ham dress play­ing with her friends, and even to the scene of her des­per­ate fam­i­ly qui­et­ly read­ing togeth­er by can­dle­light in the for­est. Oth­er episodes in her life will be less famil­iar, but Gal’s con­struc­tion of a con­tin­u­ous visu­al sequence allows read­ers to assem­ble each image into one com­pelling pic­ture. When the Nazis invade, the pages’ white back­grounds turn deep red, peo­pled with dark, face­less char­ac­ters. Using water­col­or, ink, and dig­i­tal ele­ments, Gal com­bines indi­vid­ual por­traits, land­scapes, and inte­ri­ors with inter­spersed sepia pho­tographs. The result is a com­plete rep­re­sen­ta­tion of her sub­ject, much as Eli­ach achieved in her own schol­ar­ship. A ver­ti­cal two-page spread of the Holo­caust Museum’s exhi­bi­tion on Eishyshok is the cul­mi­na­tion of a remark­able life — and of a book that ensures it will not be forgotten." — Jewish Book Council

★ "Playful, engaging illustrations feature speech bubbles that quote outraged citizens… The story of Lady Liberty’s precarious beginnings shows how much can be accomplished when people band together. Rich back matter includes a time line, photos, additional information, and a bibliography. This charming history title is a true inspiration for the present. An informative must-have for all libraries." — School Library Journal, starred review

"Groenink’s cartoon-style illustrations jauntily animate Stiefel’s account of how children helped ensure the Statue of Liberty would stand tall in New York Harbor… A timeline, bibliography, and further reading list, as well as additional statue facts and archival photos, conclude this true tale of cooperation among all ages." — Publishers Weekly