The Way to Rio Luna (Paperback) 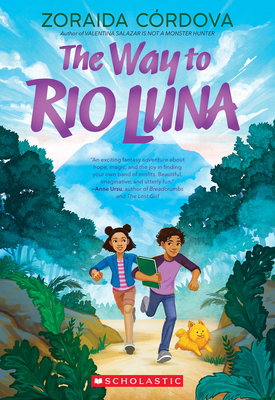 The Way to Rio Luna (Paperback)


In Stock—Click for Locations
For fans of The Land of Stories comes an adventure that reveals the secret warnings hidden inside all classic tales -- beware fairyland at all costs.Eleven-year-old Danny Monteverde believes in magic. He knows that pixie dust is real, that wardrobes act as portals, and that rabbit holes lead to Wonderland. Most of all, he believes that his older sister, Pili, is waiting for him somewhere in Rio Luna, the enchanted land in their favorite book of fairy tales.Danny doesn't care what the adults say. He knows that Pili isn't another teen runaway. When the siblings were placed in separate foster homes, she promised that she'd come back for him, and they'd build a new life together in Rio Luna.Yet as the years pass, Danny's faith begins to dim. But just when he thinks it might be time to put foolish fairy tales behind him, he finds a mysterious book in the library. It's a collection of stories that contain hints about how to reach another world. A map to Rio Luna . . . and to Pili.As his adventure takes him from New York to Ecuador to Brazil, Danny learns that meeting your favorite characters isn't always a dream come true. But nothing will stop him from finding his sister . . . even if it means standing up to the greatest threat the magical realm has ever known.
Zoraida Córdova is the award-winning author of the Brooklyn Brujas series, The Vicious Deep trilogy, and Star Wars: A Crash of Fate. She has contributed stories to the New York Times bestselling anthology Star Wars: From a Certain Point of View, and Toil & Trouble: 15 Tales of Women and Witchcraft. Zoraida was born in Ecuador and raised in Queens, New York.
Praise for The Way to Rio Luna: * "Fans of the Narnia books or Norton Juster’s The Phantom Tollbooth will delight in this microcosmic story-within-a-story, full of secrets and surprises and overflowing with introductions to a host of whimsical characters." -- Booklist, starred review