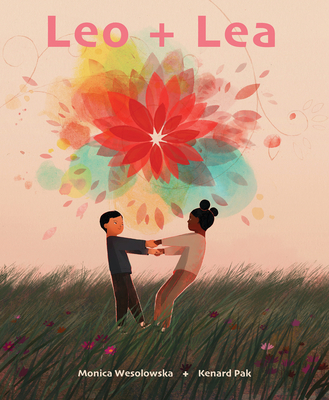 A beautiful celebration of friendship, math, and art that honors different ways of seeing and being in the world.

“It all adds up to an inventive, affecting story.” — Publishers Weekly

he sees things to count.

His classmates don’t understand counting as he does.

This beautiful friendship story, inspired by the Fibonacci sequence and cleverly constructed using its mathematical pattern, celebrates our differences, as well as how math connects us to one another.

Young readers will love counting the number of words per page and discovering how they echo the Fibonacci Sequence, a mathematical series in which each number is the sum of the previous two: 0, 1, 1, 2, 3, 5, 8, 13, 21, and so on to infinity! Text and art are masterfully conceived and constructed to reflect Leo’s love of numbers. Even the color scheme in the striking illustrations follows a mathematical progression, bringing an underlying order and tranquility to the story. The mesmerizing symmetry of this fascinating and compulsively playable game of addition can also be found in the natural world and is an intriguing metaphor for the interconnectedness of all things.

Kenard Pak used colors and shapes based on the Fibonacci sequence to create a visual story of a budding friendship that opens with a simple, airy room and blossoms into a full, lush landscape. He is the author and illustrator of Goodbye Summer, Hello Autumn, and Goodbye Autumn, Hello Winter, winner of the 2018 SCBWI Golden Kite Award for Illustration. He is also the illustrator of several picture books including Ten Ways to Hear Snow by Cathy Camper, Have You Heard the Nesting Bird? by Rita Gray, and The Fog by Kyo Maclear, which was a Kirkus Reviews Best Book of the Year. He lives in San Francisco with his wife, their young daughter, and three cats. You can learn more about his work at pandagun.com.
Monica Wesolowska was inspired by a math-loving child to base the words of this story on a math pattern. Counting as she wrote, she followed the Fibonacci sequence into a story of friendship and learned how math connects us all. She is the author of the memoir Holding Silvan: A Brief Life, named a Best Book of 2013 by The Boston Globe and Library Journal. Her essays and short stories have appeared in The New York Times, The San Francisco Chronicle, Literary Mama, The Carolina Quarterly, and Best New American Voices. She's a graduate of Reed College and teaches Creative Writing at the University of California Extension. Monica lives with her family in Berkeley, California. You can learn more about her work at monicawesolowska.com.

"A warm portrayal of a friendship sparked by an unexpected connection . . . the mathematical wonder is creatively incorporated." — Kirkus Reviews

“Math and art combine for a portrait of blossoming friendship in this picture book infused with layers of Fibonacci numbers. . . . Pak’s primarily digital renderings work in harmony . . . [and] frequently radiate pastel hues. It all adds up to an inventive, affecting story.” — Publishers Weekly