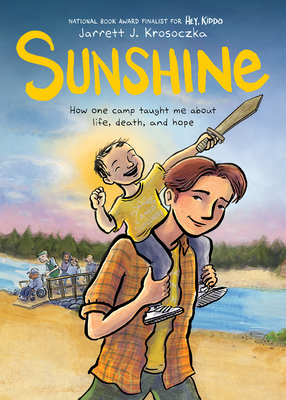 When Jarrett J. Krosoczka was in high school, he was part of a program that sent students to be counselors at a camp for seriously ill kids and their families. Going into it, Jarrett was worried: Wouldn't it be depressing, to be around kids facing such a serious struggle? Wouldn't it be grim?

But instead of the shadow of death, Jarrett found something else at Camp Sunshine: the hope and determination that gets people through the most troubled of times. Not only was he subject to some of the usual rituals that come with being a camp counselor (wilderness challenges, spooky campfire stories, an extremely stinky mascot costume), but he also got a chance to meet some extraordinary kids facing extraordinary circumstances. He learned about the captivity of illness, for sure but he also learned about the freedom a safe space can bring.

Now, in his follow-up to the National Book Award finalist Hey, Kiddo, Jarrett brings readers back to Camp Sunshine so we can meet the campers and fellow counselors who changed the course of his life.

Jarrett J. Krosoczka is a New York Times bestselling author, a two-time winner of the Children's Choice Book Award for the Third to Fourth Grade Book of the Year, an Eisner award nominee, and the author and/or illustrator of more than 30 books for young readers. His critically acclaimed graphic novel memoir Hey, Kiddo was a National Book Award Finalist. His work includes several picture books, select volumes of Star Wars: Jedi Academy, the Lunch Lady graphic novels, and the Platypus Police Squad novel series. Jarrett has given two TED Talks, both of which have been curated to the main page of TED.com and have collectively accrued more than two million views online. He is also the host of The Book Report with JJK on SiriusXM's Kids Place Live, a weekly segment celebrating books, authors, and reading. Jarrett lives in Western Massachusetts with his wife and children, and their pugs, Ralph and Frank.