In the Spirit of a Dream: 13 Stories of American Immigrants of Color (Hardcover) 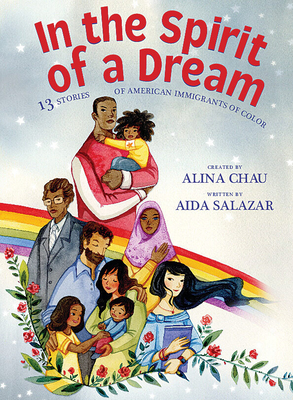 In the Spirit of a Dream: 13 Stories of American Immigrants of Color (Hardcover)

Celebratory, triumphant, and inspiring, In the Spirit of a Dream is a tribute to American immigrants of color, written in poems and illustrated by 13 first- and second-generation immigrant artists.

In the spirit of a dream, many immigrants of color set out across continents, oceans, and borders, travelling to the United States in pursuit of opportunity. This book is a celebration of 13 American immigrants of color, from world-famous to local heroes, politicians, surgeons, athletes, activists and more.

Alina Chau is an award-winning filmmaker and artist. Her credits include the Emmy Award-winning Star Wars: The Clone Wars animated series, and numerous best-selling games. She illustrated The Nian Monster, which received the 2018 APALA Picture Book Honor. Having grown up in Hong Kong in an Indonesian-Chinese family during the British colonial era and then immigrating to America, her unique cultural heritage strongly influences her artistic and storytelling voice. Her lyrical watercolors are highly sought after for art exhibitions worldwide and garnered her a devoted fan base and the accolades of her peers. She lives in Los Angeles with her little Maltipoo, Piglet. Visit her at alinachau.com.
Aida Salazar is an award-winning author and arts activist whose writings for adults and children explore issues of identity and social justice. She is the author of the middle-grade verse novels The Moon Within (International Latino Book Award Winner), Land of the Cranes (Américas Award Winner), and the forthcoming biography picture book Jovita Wore Pants: The Story of a Mexican Freedom Fighter. With Yamile Saied Méndez, she is slated to co-edit Calling the Moon, a middle-grade anthology on menstruation by writers of color. She is a founding member of Las Musas, a Latinx kidlit debut author collective. Her short story "By the Light of the Moon" was adapted into a ballet production by the Sonoma Conservatory of Dance and is the first Xicana-themed ballet in history. She lives with her family of artists in a teal house in Oakland, California.