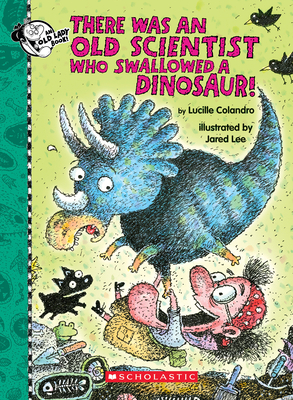 
In Stock—Click for Locations
You won't believe why the Old Scientist swallowed a dinosaur, a fern, a rock, a pick, a dustpan, a sifting screen, a pen, and a magnifying glass!

Filled with hilarious illustrations, fun rhyming text, and real facts about dinosaurs, this is the latest book in the bestselling Old Lady series that's perfect for young readers.

Lucille Colandro has written many books for children, including the bestselling There Was an Old Lady series illustrated by Jared Lee.
Jared Lee has illustrated more than 100 books for young readers. He has received awards from the Society of Illustrators, the Martha Kinney Cooper Ohioana Library Association, the National Cartoonists Society, and others. He lives in Ohio with his wife and a menagerie of dogs, cats, ponies, ducks, and a few unknown creatures.