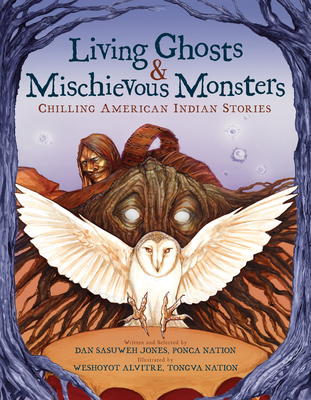 
In Stock—Click for Locations
Perfect for fans of Scary Stories to Tell in the Dark! A shiver-inducing collection of short stories to read under the covers, from a breadth of American Indian nations.

Dark figures in the night. An owl's cry on the wind. Monsters watching from the edge of the wood.

Some of the creatures in these pages might only have a message for you, but some are the stuff of nightmares. These thirty-two short stories -- from tales passed down for generations to accounts that could have happened yesterday -- are collected from the thriving tradition of ghost stories in American Indian cultures across North America. Prepare for stories of witches and walking dolls, hungry skeletons, La Llorona and Deer Woman, and other supernatural beings ready to chill you to the bone.

Dan SaSuWeh Jones (Ponca Nation) tells of his own encounters and selects his favorite spooky, eerie, surprising, and spine-tingling stories, all paired with haunting art by Weshoyot Alvitre (Tongva).

So dim the lights (or maybe turn them all on) and pick up a story...if you dare.

Weshoyot Alvitre is a female author and illustrator from the Tongva tribe of Southern California. She currently resides with her husband and two children on Ventureno Chumash Territory in Ventura, California. Her work focuses on an Indigenous lens and voice on projects from children's books to adult market graphic novels. She has recently been published as an artist in Ghost River: The Fall and Rise of the Conestoga, written by Lee Francis 4 and edited by Will Fenton; At The Mountains Base written by Traci Sorell; and was Art Director on the video game “When Rivers Were Trails.” She enjoys spinning yarn and collecting antiques.
Former Chairman of the Ponca Tribe of Indians of Oklahoma and member of the Producers Guild of America, Dan SaSuWeh Jones is a filmmaker who has produced work for Sesame Street, NBC, TBS, and other national and international networks. He worked as an honorary Imagineer and consultant for the Walt Disney Company’s Disney America theme park and as a field producer for the television miniseries 500 Nations, produced by Kevin Costner. As a bronze sculptor, he was a finalist in the competition for the American Indian Veterans Memorial at the National Museum of the American Indian on the Washington D.C. Mall. He holds a seat in the House of Warriors, a traditional Ponca Warrior Society. He was storytelling author and consultant for National Geographic Encyclopedia of the American Indian, 2019.

* "Valuable both for its broad range and shivery appeal." -- Kirkus Reviews, starred review

* "As awesome as these stories are, what makes this book a real treasure is the context that Jones provides for each tale... It is an intimate and enriching reading experience that will be a boon to library shelves." -- Booklist, starred review

"Full of alarming phenomena -- flying heads, skeletons that leave bloody footprints, flesh-eating vampire babies -- but the telling is done in such a way that we experience the stories as eerie anecdotes and folktales rather than as disturbers of our ease... With its intermittent chills, this collection will leave readers ages 8-12 with a strong sense of the supernatural as perceived and recalled in Native American communities." -- The Wall Street Journal

"This crowd-pleasing anthology... [is] delivered without macabre flourish but packing a dramatic wallop." -- The Bulletin of the Center for Children’s Books

"A frightening ride via Native American storytelling... add to your library for a diverse cultural representation of scary stories." -- School Library Journal

"The narrators, Wes Studi and DeLanni Studi, both members of the Cherokee Nation... imbue their delivery with the appropriate amount of tension, suspense, and excitement, and their steady, well-paced voices will make listeners feel as if they are sitting around a fire with master storytellers... A great recommendation for young listeners who appreciate legends and myths and are looking for something that will send shivers up their spines." -- Booklist, audio review

"Illustrated with pen-and-ink illustrations, the book has the distinction of added to the coterie of nightmares accessible to your children. They’ll love it... Spine-chilling and horrific by turns, here’s the book to hand to the kid looking for some scares and thrills." -- School Library Journal’s A Fuse 8 Production