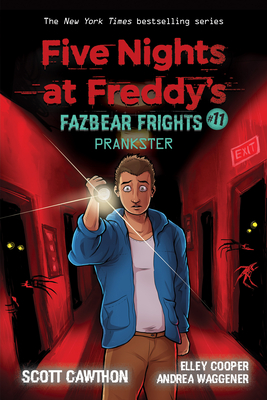 
Not On Our Shelves—Ships in 1-5 Days
Five Nights at Freddy's fans won't want to miss this pulse-pounding collection of three novella-length tales that will keep even the bravest FNAF player up at night...

Standing up for yourself can be hard . . .Jeremiah decides he's done being the butt of his coworker's jokes at their small game studio. Joel is counting the days until he can quit his family's garden center and hit the road to a new life. Aimee finally works up the courage to ditch her loud-mouthed, annoying friend at Freddy Fazbear's Pizza. But when it comes to Five Nights at Freddy's, even the most well-meaning actions can reap horrible consequences.

Readers beware: This collection of terrifying tales is enough to unsettle even the most hardened Five Nights at Freddy's fans.

Scott Cawthon is the author of the bestselling video game series Five Nights at Freddy's, and while he is a game designer by trade, he is first and foremost a storyteller at heart. He is a graduate of The Art Institute of Houston and lives in Texas with his family.
Andrea Rains Waggener is an author, novelist, ghostwriter, essayist, short story writer, screenwriter, copywriter, editor, poet, and a proud member of Kevin Anderson & Associates’ team of writers. In a past she prefers not to remember much, she was a claims adjuster, JCPenney’s catalogue order-taker (before computers!), appellate court clerk, legal writing instructor, and lawyer. Writing in genres that vary from her chick-lit novel, Alternate Beauty, to her dog how-to book, Dog Parenting, to her self-help book, Healthy, Wealthy, & Wise, to ghostwritten memoirs to ghostwritten YA, horror, mystery, and mainstream fiction projects, Andrea still manages to find time to watch the rain and obsess over her dog and her knitting, art, and music projects. She lives with her husband and said dog on the Washington Coast, and if she isn’t at home creating something, she can be found walking on the beach.
Elley Cooper writes fiction for young adults and adults. She has always loved horror and is grateful whenever she can spend time in a dark and twisted universe. Elley lives in Tennessee with her family and many spoiled pets and can often be found writing books with Kevin Anderson & Associates.